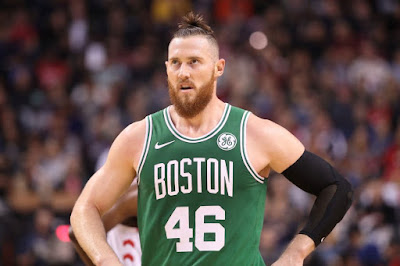 It was a week ago that Celtics big man Aron Baynes decided to return and take another crack at making a possible run towards the NBA Finals, when he exercised his $5.4 player option for the 2019-20 season.

But in light of Kyrie Irving reportedly heading to Brooklyn and now Al Horford also leaving town, this wasn't quite what Baynes had in mind when he signed on to remain in Boston for one more year.

According to ESPN's Adrian Wojanarowki, the Celtics have offered Baynes' expiring contract in the hopes of clearing up more cap space.


Jaylen Brown would be eligible for a contract extension before the start of training camp in September, while Jayson Tatum and Gordon Hayward ($34 million player option for the 2020-21 season) could sign new deals next summer as well.

Moving Baynes' salary, along with Irving and Horford walking into free agency would create $23 million in cap space that the Celtics could play with on rookie deals (three first round picks in Thursday night's NBA Draft), plus potentially on pending free agents Terry Rozier (restricted) and or Marcus Morris (unrestricted).

Assuming Baynes, who came to a mutual decision with Danny Ainge to possibly be traded, gets dealt and the Celtics don't re-sign Morris or Rozier, there essentially could be approximately $33 million in cap space going forward.


If the Boston Celtics can trade Aron Baynes without taking any salary back, and then renounce all of their FAs, they should have enough space to make a max offer to a 7-9 years of service player with a starting salary of just under $33M for 2019-29.
— Keith Smith (@KeithSmithNBA) June 20, 2019


It appears that a full youth movement has begun for Ainge and the Celtics, as the offseason is off to an interesting start