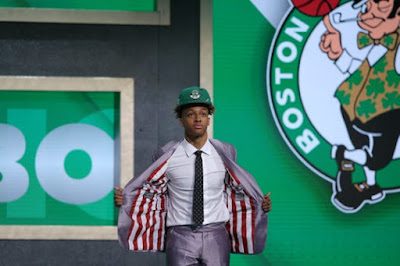 With all the madness that was the Celtics' 2019 NBA Draft -- picks, trades, salary dump, etc. -- we've decided to make it easy for you and give you a thorough recap of what went down in Brooklyn Thursday night.

Boston entered the 2019 NBA Draft equipped with picks No. 14, 20 & 22 and left with a much different bag -- one that was filled with rookies, cash and future assets. Check out how it all went down.

Celtics select Romeo Langford at No. 14

Brad Stevens and Danny Ainge sure love guards who can push the ball and score in transition. No surprise the Celtics used their No. 14 pick on Indiana's Romeo Langford.

He's one of many mid-to-late first round picks that was selected in the 2019 Draft -- one who can score off the dribble, is athletic and averaged 16.5 points on 44.8 percent from the floor. Langford is an efficient shooter, however, his transition offense could make him a spark off the bench for the Celtics, if he's able to crack Stevens' rotation.

Celtics trade No. 20 pick to Sixers

Boston traded its No. 20 pick in the first round to Philadelphia in exchange for the 24th and 33rd pick. Mattise Thybulle was selected at 20.

Celtics select Grant Williams at No. 22

The 6-foot-7 forward out of Tennessee is an old school kind of player who loves to play in the post and get high-percentage shots. Grant Williams is tough hard-nosed forward who has a knack for pulling down rebounds, absorbing contact and making trips to the free-throw line.

Former Celtic champion center Kendrick Perkins gushed of Williams, he's called him one of his favorite underrated players of the 2019 NBA Draft class. 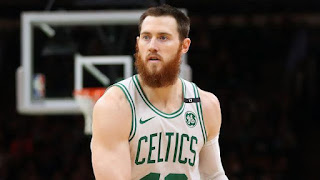 Celtics trade Aron Baynes to Suns for No. 24

In a move to add cap space, the Celtics shipped Aron Baynes to Phoenix in exchange for the No. 24 pick and a future 2020 first-round pick. The future pick was later reported by ESPN's Adrian Wojnarowski, who clarified that in 2020 the rights to the pick is owned by the Bucks from a previous deal between Phoenix and Milwaukee (Eric Bledsoe trade).

Nonetheless, Danny Ainge managed to generate just over $5 million with the move. Langford, the Celtics' mid first-round selection, is expected to make about $3.5 million in his rookie season.

The move certainly gives out the impression that the Celtics will certainly be buyers in the free agency market. However, Thursday's draft won't be the only trade Boston makes this offseason, expect Ainge to find other ways to generate more cap space.

Celtics select Carsen Edwards at No. 33

It would have been a surprise to see the Celtics finish the night without drafting at least one point guard. With Kyrie Irving out of the picture and Terry Rozier weighing his options, Boston made sure they were going to add to its backcourt and did it in the second round, where they drafted Carsen Edwards.

The Purdue product was a scoring machine in the backcourt, where he averaged 24.3 points per game. He also has a 3-point shooting touch and could be an everyday NBA player in due time.

There's a good chance we see Edwards become the Celtics' newest draft-and-stash prospect of 2019 but he is a player to keep an eye on during Summer League and throughout the preseason.

Celtics select Tremont Waters at No. 51

Another point guard drafted in the second round for the Celtics, LSU's Tremont Waters fell to the late second round due to being an undersized guard. He's a steady playmaker with great ball-handling skills.