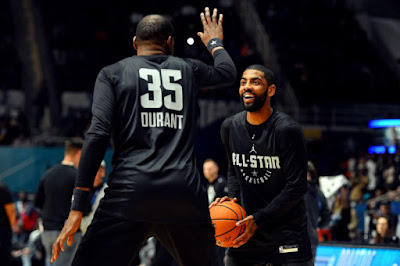 Kyrie Irving has been very quite since the Celtics were knocked out of the NBA playoffs by the Milwaukee Bucks last week, but the rumor mill keeps on spinning when it comes to where the All-Star guard might land come July 1.

Though a recent report over the weekend suggested that Irving would be open to reuniting with LeBron James and signing with the Lakers, a rumor ESPN's Stephen A. Smith dismissed that of his colleague Brian Windhorst completely on Monday morning.


"I got a text message from folks close to Kyrie's family within the hour," Smith said on ESPN's First Take today. "Quote: ‘there is no way in hell he's going to L.A.'"

According to Smith, Irving is more likely to join friend and former league MVP Kevin Durant and sign with the New York Knicks this summer.


"From everything that I've been hearing over the last few days, Kyrie Irving his heading to New York City," Smith said. "Kyrie Irving is heading to Madison Square Garden with Kevin Durant. People in his inner circle are trying to bring the Nets into the mix, but clearly New York is the destination, the likelihood is that it will be MSG."

Smith also suggested that Knicks' owner James Dolan is willing to do whatever it takes, including stepping away from the team to get both to sign in New York.


"It appears to be a foregone conclusion," Smith said. "I don't know whether that's true or not. Neither Kevin Durant or Kyrie Irving are talking about these things. But I am telling you what the belief is. They are destined to go to MSG."

The only thing that might sway Irving's decision to bolt to the Knicks would be if an emotional Durant were to change his mind and not want to head to New York.


Yes. From everything I’ve heard, KD and Kyrie are planning on coming to New York. 95% Chance they say! Only potential hiccup is KD changing his mind pic.twitter.com/9ezL7IEc3y
— Stephen A Smith (@stephenasmith) May 11, 2019


Irving, who grew up in New Jersey, has a $21.3 million player option that he's expected to opt out of to become an unrestricted free agent. Danny Ainge will make re-signing Irving a top priority, especially because if he leaves, the team will have no real cap space to sign another superstar.

The Celtics will also attempt to trade for New Orleans' Anthony Davis during this offseason.