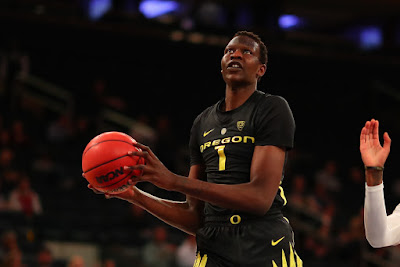 Over the last ten years in the NBA, we have seen the emergence of international players. Everyone remembers Yao Ming and how dominant he was during his time with the Rockets, when he left China for the NBA in 2002.

At the time we had never seen a 7-foot-6 international player who could take over the league as one of its elite big men. In more recent years, we have seen the rise of Giannis Antetokounmpo, who's become one of the league's greatest players and this year we have a 7-foot-2 Sudanese-American big coming out of Oregon named Bol Bol.

Son of former NBA star Manute Bol, the former McDonald's All-American and five-star recruit received an invitation to the Nike Hoop Summit in 2018. Due to a foot injury, Bol was only featured in nine games for the Ducks before declaring for the NBA Draft.

In nine games, he averaged 21 points, 9.6 rebounds while shooting 56.1 percent from the floor. Even though Bol played only one season in the NCAA, he still has a lot of experience playing with many other teams, including training camp for the 2017 FIBA Under-19 World Cup -- a small sample size, for sure, Bol showed tremendous upside for an NBA team.

Besides stating the obvious about his height -- 7-foot-2 -- he is also a versatile offensive player. Bol will cross over defenders and make them miss with a simple head-fake juke or even a simple shuffle step to dodge a contesting defender.

While it is impressive to see, it is also uncommon for a center to have the ball skills that he has. His teammates in Oregon felt comfortable passing him the ball anywhere on the court and Bol was confident enough to get it in the basket. With the new generation of centers being capable of being a spot up shooter, Bol should have no problem at that in the NBA.

The Celtics have been in need for rim protector since Kevin Garnett was traded in 2013 and with Anthony Davis heading to Los Angeles because of a gamble Danny Ainge was unwilling to make, it's time for the Celtics president of basketball operations to take a risk and draft Bol with either the No. 14 or 20 pick. Boston can keep its core group while still getting the big man that its been missing.

Continuing to build through the draft while picking up complimentary pieces along the way -- similar to what the Warriors did -- should be the Celtics' plan moving forward. Bol could be one of the greatest international big men the league has ever seen, Boston should capitalize on this opportunity to steal a future star.