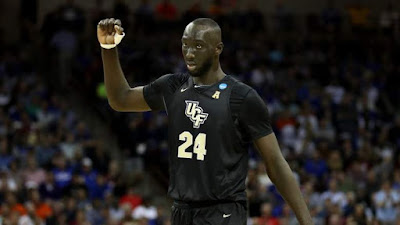 The Celtics didn't take a chance on Oregon's big man Bol Bol at this year's draft but undrafted UCF rookie Tacko Fall will have a shot this summer.

The necessity of a dominant force at the center position has become a hot commodity in today's NBA. The ability they have to be a forceful defender, control the paint, and now shoot 3-pointers at a consistent rate, has made the urge for a big man much more desirable. The Celtics haven't had a true force at the position since the championship runs they made after acquiring Kevin Garnett in 2007.

Most fans thought the Celtics were going to use one of their four draft picks to select Bol or Goga Bitadze. Surprising to all of us, they did not select a center, leaving all of us assuming they're going to target one in free agency.

Nikola Vucevic has been a player linked to the Celtics. However, Boston inked Fall to an Exhibit 10 contract, which was introduced in the NBA's most recent CBA, one-year deals paying the minimum salary and can be used as two-way contracts. The undrafted rookie will have a shot at making the team this fall and will be added to the Celtics' Summer League roster.

At 7-foot-6, Fall averaged 11.1 points and 7.6 rebounds at UCF. His offense was pretty simple, throw the ball to him in the paint and he'll get it into the basket -- he finished the season scoring at a 74.8 percent clip. However, it's hard to judge Fall based off his stats, especially considering what he means on the defensive end of the floor.

It is beneficial to use the eye test to see how he pans out. Fall does not shoot 3-pointers, and on a team like the Celtics, he might not need to shoot from behind the arc but it would be a game-changer if he could ultimately stretch his game that far from the paint.

There should be a level of excitement behind this signing. If offered a roster spot, Fall would be the tallest player in the NBA, surpassing 7-foot-3 big man, Kristap Porzingis.