How Al Horford, Kyrie Irving could unite in Brooklyn 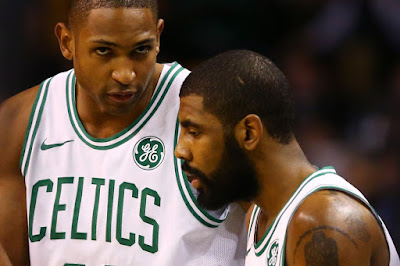 Kyrie Irving may not be the only former Celtics player heading to Brooklyn.

According to A. Sherrod Blakely of NBC Sports Boston, there's been talks about Al Horford potentially heading to the Nets. The report was revealed Wednesday, following the bombshell that dropped Tuesday evening, reports that Horford has ended talks on re-signing with the Celtics, and now a league source has informed Blakely that the Nets could be in business for Horford.

After seeing Kevin Durant suffer a season-ending injury in Game 5 of the NBA Finals, Brooklyn is still interested in pairing him alongside Irving. While Irving remains the Nets' primary free agent target this summer, ESPN's Adrian Wojnarowski reported that Brooklyn may not be crazy about the idea of bringing in Irving as a "solo act."


"What Brooklyn would like to have is not just Kyrie Irving, but a second star to come in with him, and obviously Kevin Durant is that player," Wojnarowski said. "If they don't get a second star, it will be interesting to see if Brooklyn wants Kyrie as a solo act. That didn't go so well in Boston last year.

"So we'll see if Brooklyn is still following through on just Kyrie Irving, because if they don't take Kyrie Irving they can just bring back D'Angelo Russell at a lower number, younger player. But the focus with the Nets: get two stars, and to try to get Kyrie Irving to go out and try to recruit KD." [Clutch Points]

The Nets would ultimately join a list of teams like the Lakers and Clippers -- two organizations equipped with cap space willing to bring in Horford if or when they strike out on inking players like Durant, Kawhi Leonard, Khris Middleton, Klay Thompson and Jimmy Butler. Horford is certainly next on the list in terms of being one of the most desirable free agents available but the decisions of the aforementioned slew of All-Stars will take precedence over Horford's discussion with potential suitors.

With less than two weeks left between now and the official start of free agency, we can expect a plethora of conflicting reports surrounding Horford's future. Stay tuned.