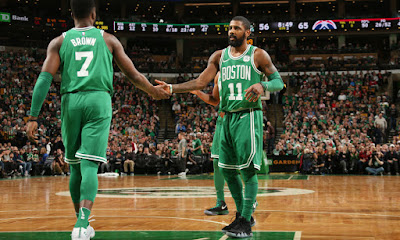 It's no secret that Kyrie Irving wasn't the best leader for the Celtics this past season and now that the pending free agent is likely to take his talents elsewhere, rumors of his demeanor behind the scenes with younger teammates are slowly coming to light.

Chris Mannix of Sports Illustrated, recently appeared on Fox Sports Radio and spoke about Irving's not so great relationships with Jaylen Brown and Terry Rozier, especially.


"You can write a whole book on what went wrong because the season was basically a disaster from start to finish," Mannix said. "His (Irving's) relationship with the young players on the roster was awful. Jaylen Brown, he was probably the worst with. I don’t think it was great with Jayson Tatum, and it was awful with Terry Rozier because Terry was supplanted at a position he thought he did enough to win. That created a pretty nasty atmosphere. Kyrie’s leadership skills were lacking, and he failed at it. He was the first player to be coached by Brad Stevens who didn't really enjoy being coached by Brad Stevens and that relationship wasn't solid."

Mannix's quotes came out after ESPN's Jackie MacMullan talked about Brad Stevens "force feeding" Gordon Hayward, who was still coming back from an ankle injury, which meant less playing time for the Celtics young core of Brown, Rozier and Jayson Tatum, that led to rifts in the locker room throughout the season.

Irving has informed the Celtics he's leaving in free agency, while Al Horford looks to be heading out the door to sign a new four-year deal as well. Both All-Stars have reportedly been linked to signing with the Brooklyn Nets, but nothing is officially set in stone.