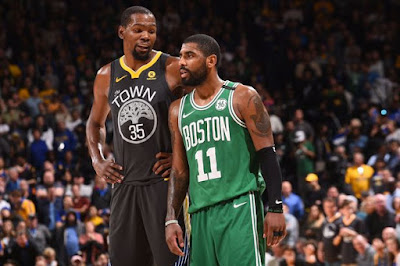 Kyrie Irving is not only going to the Nets, like most speculated was going to happen, he's bringing his close friend with him.

Irving has agreed to a four-year, $141 million max deal while Warriors forward Kevin Durant has agreed to sign his four-year deal, worth $164 million, according to ESPN's Adrian Wojnarowski. Adding depth to their frontcourt, the Nets has also come to an agreement with Knicks center D'Andre Jordan, who plans to sign with Brooklyn as well.


Durant, who's expected to miss the entire 2019-2020 season due to a ruptured right Achilles, still adds plenty of buzz to a team that all of a sudden has two perennial All-Stars with championship pedigrees and a veteran big man who will mean a lot to the defensive end of the floor. Meanwhile, the Celtics will officially wave goodbye to Irving.

After failing to execute a three-team, sign-and-trade swap, including the Nets, the Celtics pulled the trigger on a deal with the Hornets -- sending Terry Rozier to Charlotte in exchange for Kemba Walker. Irving leaves behind a disappointing two-year stint in Boston, where the Celtics were unable to achieve deep playoff success with Irving at the helm.

Instead, fans will look back on what happened in 2018 when Irving sat and watched an overachieving Celtics team come one win short of the NBA Finals. The 2018-19 campaign will be forever remembered as the season when Irving and his teammates struggled to find chemistry on and off the court before Irving's empty promise of postseason dominance fell flat and eventually made it clear he wasn't planning on coming back to Boston weeks before the start of free agency.

Irving averaged 24.1 points, 6 assists and 4.4 rebounds throughout his stint with the Celtics.