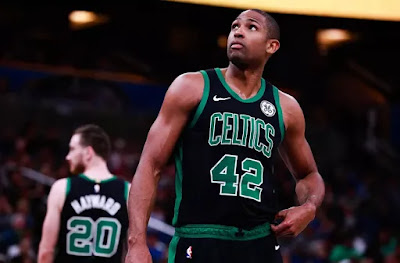 Celtics big man Al Horford is reportedly on his way out of Boston.

After opting out of a $30 million player option of his four-year deal Tuesday, Horford is expected to sign a new contract with another team.

Steve Bulpett of the Boston Herald broke the story Tuesday evening, stating negotiations between Horford and the Celtics ended and that the veteran big man is on his way out.


Major change in the Al Horford situation:
Per source close to Horford, his side is no longer discussing a new 3-year deal to stay with the Celtics. He is expected to sign a 4-year free agent contract elsewhere...
Story to come.
— Steve Bulpett (@SteveBHoop) June 18, 2019


The news came following a separate report claiming that the Celtics ended their talks with Kyrie Irving, making Horford the second member of the team's core that's expected to head out of town. Less than one week removed from the NBA Finals, it's already been a disappointing off-season for Danny Ainge.

While all signs are pointing Irving towards Brooklyn, there’s no word on where Horford has his eyes set on for next season but a report from Boston Herald's Mark Murphy suggests that the soon-to-be former Celtics big man already has a destination in mind.


League source: Celtics believe Horford may already have a good idea of where he's headed, after such a dramatic step back from negotiations.
— Mark Murphy (@Murf56) June 19, 2019


There will be a handful of contenders lining up for an opportunity to sign Horford, teams with max-deal slots available. With top-tier free agents like the Warriors' Kevin Durant and Klay Thompson presumably out for next season, Horford is all of a sudden one of the most desirable free agents on the market.

For a 33-year-old versatile big man, Horford has been adamant about winning an NBA championship from the day he signed with the Celtics. And with the recent turn of events -- his franchise striking out on the Anthony Davis deal, Irving reportedly heading out -- that window of possibility of competing for a title in Boston has closed considerably for a top-notch big, who's hoping to help lead a championship-caliber team as he approaches the twilight of his career.