Report: Celtics are a 'stealth suitor' for Kemba Walker 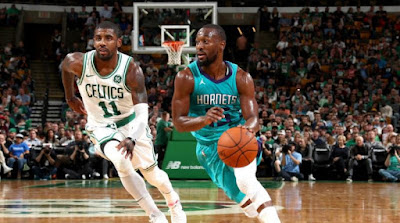 Danny Ainge and the Celtics are reportedly targeting one of the biggest names on the free agency market.

According to Marc Stein of the New York Times, Boston has emerged as a "stealth suitor" to land All-Star point guard Kemba Walker.


Walker, who's in line for a supermax payday if he decides to stay with the team he's spent his entire eight-year career with, would be passing up on a $221 million contract if he were to leave Charlotte. With veterans like Kyrie Irving and Al Horford most likely leaving town, the Celtics have become major buyers in the free agency market due to their newfound cap space.

In a move made to shave extra salary off the books, Boston traded its big man Aron Baynes last Thursday on draft night and if they were to renounce its rights to the rest of its top free agents along with Irving and Horford -- Terry Rozier and Marcus Morris -- the Celtics could offer Walker a contract worth up to $32.7 million in its first year, according to Yahoo Sports' Keith Smith.

Replacing one All-Star point guard for another in the same summer would be a lucky break for the Celtics, a team that is still considered playoff bound in the 2019-2020 campaign, despite the loss of two of its best players. Coming off of his first All NBA Third Team selection, Walker averaged 25.6 points, 5.9 assists and 4.4 rebounds for the Hornets last year.