Report: Celtics are looking to trade up in NBA Draft for Darius Garland 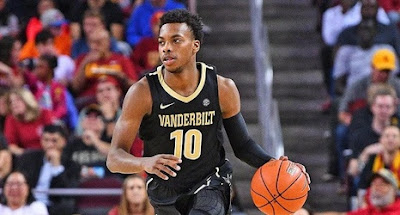 The Celtics are reportedly interested in trading up to the top of the first round of the 2019 NBA Draft.

According to Jonathan Givony of ESPN's NBA Draft Express, Boston has its eyes on Vanderbilt point guard Darius Garland. The top prospect is projected to be taken at No. 4 by the Pelicans Thursday but after a last-minute workout with the Knicks, it looks like New York is also considering taking Garland at No. 3.


Darius Garland will conduct a last-minute workout in Tarrytown with the New York Knicks tomorrow, a source told ESPN. Garland is in serious consideration for the No. 3 pick. Minnesota, Boston, Chicago are teams looking at potentially trading up to No. 4 with Garland in mind.
— Jonathan Givony (@DraftExpress) June 18, 2019


Garland, who has the potential to be the best point guard in this year's draft class, played in five games his freshman year before suffering a left meniscus injury that shelved him for the rest of the year. Still, it didn't hurt his draft stock much, due to his impressive offensive skill set that has be compared to Steph Curry.

After only five games Garland has been labeled as a deadly 3-point shooter with better handles than anyone else in his draft class. He averaged 16.2 points and 3.8 rebounds while shooting 53.7 percent from the floor, including 47.8 percent from behind the arc throughout his small sample size, and will certainly be on the table as New York and New Orleans will listen to various trade offers before Thursday's NBA Draft.

What Celtics president of basketball operations Danny Ainge plans on offering to acquire Garland will be interesting. He could package all three of Boston's first-round picks (No. 14, 20, 22) but that may not be enough to trump all other offers.

Celtics may have to include the 2020 Memphis pick in a proposed deal that is top-6 protected but then becomes an unprotected first-round pick in 2021.