Why Kemba Walker, not Nikola Vucevic, is best move for Celtics 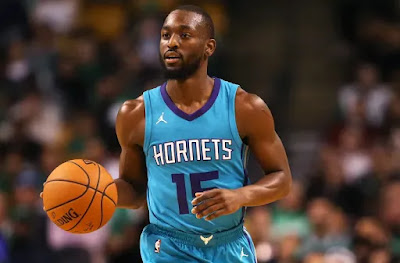 With an opportunity to stay afloat in an openly competitive Eastern Conference, Danny Ainge is zeroing in on his primary target.

We're less than one week away from the start of free agency, and the Celtics are hoping to pry Kemba Walker away from the Charlotte Hornets. For a franchise that has propped up its cornerstone player from mediocrity to an All-NBA star, the Hornets are hoping to retain Walker's services and lock him into a new lucrative deal.

However, making Walker one of the richest players in basketball is the only promise Charlotte owner Michael Jordan can make right now -- as high as a four-year deal worth $221 million. Meanwhile, the Celtics' four-year offer tops out at just $140 million.

Whether Charlotte decides to offer the entire supermax to its starting point guard or not, there still won't be much wiggle room in terms of carving out cap space for a second-tier free agent on the market to place alongside Walker, which leaves the Hornets in the NBA's purgatory -- where franchises are either good enough to fight for a playoff spot every year and never advance or not bad enough to secure a top-tier lottery pick in the upcoming draft reside. These handful of teams typically take years, or decades even, to mold into championship contenders.

This is where the Celtics' leverage comes into play. Boston can not only promise the three-time All-Star consistent playoff runs in the east, they can also offer a chance to compete for a title down the road, as soon as within the next couple of years. The core of Gordon Hayward, Jayson Tatum, Jaylen Brown alongside Walker, secures playoff runs further than first-round exits, thus keeping Boston in the mix with Eastern Conference powerhouses like the Raptors, Bucks and Sixers.

The Celtics are also only one year away from possibly having another max-deal slot open, depending on what Gordon Hayward does with his option for the 2020-2021 season. Not to mention Boston still owns the Grizzlies' potential lottery pick in either the 2020 or 2021 NBA Draft, in other words, the Celtics' foreseeable future looks significantly brighter than Charlotte's.

Although acquiring Walker wouldn't necessarily make the Celtics the favorite to win the east, like Kyrie Irving did last year, it does give head coach Brad Stevens another shot at proving to the world that his pace-and-space offense can flourish around another ball-dominant point guard. We saw it work wonders for Isaiah Thomas back in 2017 before the All-Star point guard's season-ending injury ended his run in the Eastern Conference Finals, but after seeing how things unfolded for an Irving-led Celtics team last season, there's plenty of reason for skeptics to question the direction Boston wants to head towards.

Ainge has options. If it's one thing we learned from the 2018 Irving-less playoff run, it's that the Celtics proved they can be successful behind a much more fluid offense -- one that's not focused on its point guard handling the ball significantly more than his teammates. Still, Stevens can find success somewhere in the middle.

Walker can run the fast-break, create off-the-dribble in open spaces, weave through defenders and drain 3-pointers in pick-and-pop situations. But will he be an upgrade from Irving, in terms of leadership and likeability?

Those are two qualities the Celtics absolutely discussed before looking into Walker and if they're courting the free agent point guard, it's because they believe he's worth the risk of finding out. After clearing over roughly $30 million in cap space, breaking the bank to position Walker at the helm is the Celtics' best option right now.

However, Boston's gaping hole in the frontcourt -- one that's depleted from the vacant spots left behind by primary big men Al Horford and Aron Baynes -- could be filled by a potential star on the rise. Nikola Vucevic's, 28, career season -- one that earned him his first All-Star selection -- could be the beginning of a perennial All-Star blossoming before our eyes just before the ripe age of 30.

Should the Celtics ink him to a multi-year deal worth significantly less than Walker's price tag? The allure of seeing Boston spend an estimated $21 million per year for a solid 20/10 guy with upside and a similar Al Horford-like game is tempting.

Vucevic not only averaged more than 3 assists last year, the All-Star big man attempted two 3-pointers a night while shooting at a 36.4 percent clip. This Nikola could be on the verge of becoming the Eastern Conference's version of the other Nikola (Jokic).

Unfortunately, the Celtics can't sign both guys -- which leaves Ainge with the decision of going after one significantly harder than the other. Still, Walker should be Boston's top priority.

Neither guy will make the Celtics a championship team right away, however, the window of opportunity is bigger with Walker than it is with Vucevic. Boston will once again become a strong candidate for free agent destinations, if Walker is in a Celtics uniform. The effect isn't the same with Vucevic.

Vucevic provides plenty of value on the offensive end of the floor as a stretch big who can score from behind the arc, rebound and elevate the frontcourt's offensive production but with Vucevic there's plenty left to be desired on the defensive end of the floor. Stevens will have to lean on young bigs such as Robert Williams, Semi Ojeleye and Daniel Theis, but the frontcourt's defense will improve in due time.

The electrifying top-10 point guard would also give Boston one of the league's best closers. The Celtics know firsthand what Walker is capable of in the fourth quarter, bringing him into a competitive environment like Boston alongside veteran Gordon Hayward and rising star Jayson Tatum should elevate his production and efficiency in late-game situations.

It will bring Boston that much closer to title-contention territory -- where Walker's never been and is itching to prove himself.