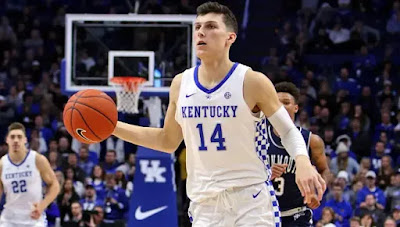 The Celtics still have an unclear view on their guard positions heading into the 2019-20 season.

Let's take a look at the conundrum of this position: all signs are leaning towards Kyrie Irving heading to Brooklyn (or elsewhere), Terry Rozier may have burned all of his bridges in Boston and Brad Wanamaker will probably be testing out free agency, yet again.

PJ Dozier and RJ Hunter being on two-way contracts with the Maine Red Claws, gives us some depth to sort of "ease our minds," I guess you could say, and that leaves us with Marcus Smart, Jaylen Brown and Jonathon Gibson as the remaining guards on the current roster. It's safe to say that whether through free agency or the draft, the Celtics need to get some players and add some depth to the guard positions.

Let's see what University of Kentucky's Tyler Herro has to offer.

Herro is a confident, lightly-seasoned 6-foot-5 guard who just completed his freshman year playing for coach Calipari. The 19-year-old, four-star recruit started every game for the Wildcats, ending his college career with 14 points, .462 FG, .355 3FG, 4.5 rebounds, and 2.5 assists averages.

He is quick and tricky with the ball in the open lane and has a very quick release when shooting from behind the 3-point arc. Impressive handles mixed with long strides when running up and down the floor makes it challenging for defenders to stop him.

He proved he can shot well from outside but Herro is a deadlier shooter from inside the arc and the painted area. Also, if he doesn't see the shot he wants to take, Herro will instinctively drive to the hoop (.538 2FG%).

Herro has the ability to switch hands with the ball at expert levels and the way he uses both of his hands would lead you to believe he's ambidextrous. One of his weaknesses is passing (2.5 assists per game), he will go toe-to-toe with anyone before thinking about passing the ball to a teammate.

Still, watching him play is like looking at a superstar in the making -- he knows he is good and can outplay you. However, Herro will need to become more of an engineer on the court and be able to play the point as well as the two-guard position in order to really contribute to an NBA team.

With versatility, he will be better off as a combo guard -- one current NBA comparison that comes to mind is Danny Green. Herro would be a good selection for the Celtics at either the No. 20 or 22 pick.