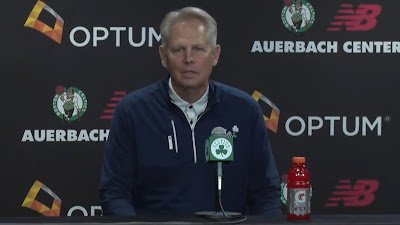 It's been a long week for Danny Ainge, after he struck out on a potential trade for Anthony Davis, Kyrie Irving is reportedly heading to the Brooklyn Nets and apparently Al Horford is awaiting a new four-year deal elsewhere.

The Celtics president of basketball operations remains optimistic, as he usually does, about the future of his team. Following Thursday night's NBA Draft, Ainge expressed enthusiasm despite the uncertainty of the current roster.


"I'm excited about our team going forward," Ainge said after Thursday's draft. "I like where we're headed. I like the core young group of guys and I think it’s going to be really fun."

Ainge couldn't speak about Irving, Horford or even Aron Baynes, who was reportedly traded, along with the No. 24 pick (Ty Jerome) to the Phoenix Suns for a protected (1-7) first round pick in 2020. Ainge is ready to embrace the youth movement and players that want to be in Boston.


"We have a very attractive franchise to play for, and there's a lot of people who would be dying to come play here," said Ainge.

A year ago, Ainge had a championship contending roster that was ready to represent a wide open Eastern Conference. After a disappointing 2018-19 campaign, Ainge finds himself with a young core or Jayson Tatum and Jaylen Brown, plus nearly $34 million in salary cap space and four newly drafted rookies.


"Good people. Actually all four of [the picks] are very good guys," said Ainge. "That played a very big part into why we selected them. Who they are, not just what they are capable of doing on the court. Very excited about their personalities and their character and I think they have the will to become great."

Ainge and the rest of the Celtics coaching staff got a reminder this season that talent can get you far, but chemistry is also a huge part of being a successful team.

A question was asked of how important was it when looking at possible leadership qualities in this year's draft?


"I've always said everybody is leading somebody — the right way or the wrong way," said Ainge. "I'd say everyone is a leader. So, yes, character and leadership are very important as we look at players."

It seems like Ainge is destined to learn from last season's tough lessons and move on with a group of youngsters that will hopefully give the Celtics GM less headaches going forward.