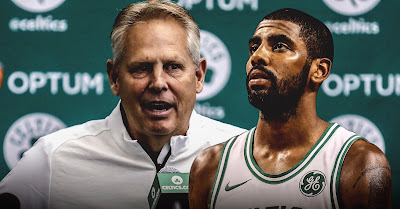 Kyrie Irving is heading to the Brooklyn Nets, at least that's what the rumors have been as of late and contrary to what most have reported about the pending free agent guard being unforthcoming with the Celtics, he has indeed been communicating with Danny Ainge about his upcoming plans.

According to Shams Charania of The Athletic, Irving has kept in contact with the Celtics since the team was eliminated by the Milwaukee Bucks last month.


Irving has been communicative and forthright with top Celtics officials since the season ended, with private and public signals that he will leave the organization in free agency — likely for the Brooklyn Nets, league sources tell @TheAthleticNBA @Stadium. https://t.co/EupfcYxhsg
— Shams Charania (@ShamsCharania) June 18, 2019


News of Irving speaking with Ainge comes on the heels of big man Al Horford, who opted-out of his $30 million player option early Tuesday and abruptly ended contract negotiations with the Celtics, as he reportedly is preparing to sign a new four-year deal elsewhere.

Charania reported on Monday that the Celtics planned to meet with Irving sometime this week prior to the NBA Draft, unless it has already happened.


"All-Star Kyrie Irving, who has decided to opt out of his $21.3 million deal for next season to become a free agent, and top Celtics officials will meet soon to discuss his future, league sources said. A potential meeting could occur before Thursday's NBA draft sources said, as both sides could look for clarity ahead of the start of free agency on June 30." [The Athletic]

With Anthony Davis off the market and now Horford apparently leaving town as well, this looks to be the final nail in the 'Celtics still being able to re-sign Irving' coffin that Ainge could not have foreseen so soon into the start of his offseason.