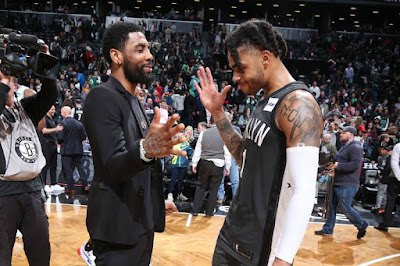 It looks like there's a realistic chance we could see Kyrie Irving head to the Nets this summer.

ESPN's Adrian Wojnarowski, reported there is mutual interest between the Celtics All-Star point guard and Brooklyn. So much so that the Nets cleared up a significant amount of cap space Thursday, enough for the up-and-coming franchise to reel in an additional max-deal free agent.

Brooklyn agreed to send Allen Crabbe, along with his $18.5 million contract, the No. 17 pick in the 2019 NBA Draft and a 2020 lottery-protected first-round pick in exchange for Taurean Prince and a 2021 second-round pick.

According to Woj, the cap-clearing move was Brooklyn's way of appeasing Irving -- showing Irving just how serious they are about signing him and another top-tier free agent to accompany him.

Kyrie Irving is serious about the Nets -- and the Nets are serious about beating the Knicks -- and rest of league -- to the biggest free agents in the marketplace, per league sources.
— Adrian Wojnarowski (@wojespn) June 6, 2019


The Nets are now in the same position as the Knicks -- two franchises with two max-deal slots available, vying for Irving's services. Irving's increased interest in playing for the Nets, according to league sources, has placed them at the top of the list of possible suitors.

Brooklyn can also now retrieve restricted free agent D'Angelo Russell, if they choose to, and pair him with a top-tier free agent.

Earlier this week, Woj's colleague Stephen A. Smith said he spoke to those close to Irving and the pending free agent wants to sign with the Nets, dismissing his own report from last month of Irving and Kevin Durant heading to the Knicks.


"I have learned that Kyrie Irving has given every indication to the Brooklyn Nets that that is where he wants to go, not the New York Knicks," Smith said Tuesday on ESPN's First Take, adding that he has not spoken to Irving or Durant on the matter.

On Wednesday, Celtics president of basketball operations Danny Ainge also commented on Irving's upcoming decision, confirming that he had not received any indication from the superstar guard that he wants out of Boston, despite the latest rumors and reports.


"There's ongoing conversations. We'll have to wait and see what happens," said Ainge.