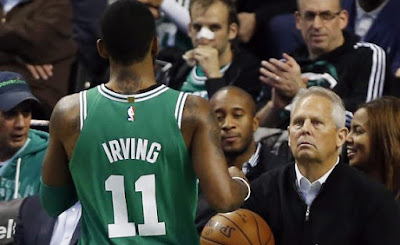 After weeks of rumors and speculations, the Celtics are reportedly not convinced that they will re-sign Kyrie Irving.

Reports have picked up steam, especially this past week of shared mutual interest between Irving and the Brooklyn Nets.

Adam Himmelsbach of the Boston Globe reported, despite all indications that Irving could possibly be preparing to sign as a free agent with the Nets, the Celtics believe if they pull off a trade for Anthony Davis, there's still a slight possibility to sway the 27-year old superstar's decision to remain in Boston.


"According to league sources, the Celtics’ belief that Irving will re-sign with them after free agency opens on June 30 has eroded.

There is still some hope within the organization that Irving will have a change of heart if Boston is able to acquire Davis. And Irving's fickle personality certainly makes anything possible until he officially agrees to terms with some team.

But the likelihood of an Irving return appears to be decreasing. Nevertheless, the sources said, it is clear that the Celtics' pursuit of Davis will push forward." [Boston Globe]

Davis' agent Rich Paul re-iterated on Wednesday, that his client will not re-sign long term with the Celtics, essentially warning Danny Ainge not to trade for the Pelicans All-Star come this summer.


"They can trade for him but it'll be for one year," Paul said. "I mean: If the Celtics traded for Anthony Davis, we would go there and we would abide by our contractual [obligations] and we would go into free agency in 2020. I've stated that to them. But in the event that he decides to walk away and you give away assets? Don't blame Rich Paul."

Ainge's pursuit of Davis will continue regardless of Irving's future with the franchise and even if Davis walks a year from now. But if both superstars are gone plus, young talent and assets, the Celtics could find themselves in a worse rebuild than the one at the start of 2013-14 season.

Irving, who will opt-out of his current contract, could potentially sign a five-year/$190 million deal to stay in Boston, while Davis has one year left at $27 million and a player option worth $28.8 million for the the 2020-21 season.

Ainge, who spoke to the media last week, was adamant that whatever Irving decides the Celtics president of basketball operations does not have buyer's remorse and never will when it comes to taking a chance on making a move.


"We made a risk by trading for Kyrie, and no matter what happens with Kyrie, I’ll never regret that. You just move on to the next deal."

After witnessing the Toronto Raptors not only take a risk on Kawhi Leonard a year ago, they're now enjoying the payout of the franchise's first championship, while they could still lose Leonard in a couple of weeks to free agency.

Could the Celtics look to pull-off a similar trade in the upcoming days? Stay tuned, as June 30 can't come any sooner.