Why the Bucks could target free agent Al Horford 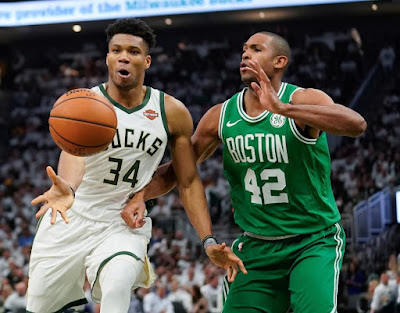 As one of the league's top teams at the time, the Celtics entered the 2018-19 season as a favorite to make it to the NBA Finals.

Equipped with All-Star talent and rising stars, Boston struggled to find its identity throughout the regular season and ultimately came up short in the playoffs -- where a second-round exit against the Bucks brought the Celtics back down to earth. The postseason heroics Kyrie Irving promised never materialized and the chemistry issues that had plagued Boston all year long reared its ugly head after a promising five-game winning streak to start the postseason was followed by the Celtics dropping four straight against the Bucks.

To make matters worse, Boston's superstar target in Anthony Davis was dealt to the Lakers and a report indicated that Irving has officially informed the Celtics he isn't coming back next season. For a veteran like Al Horford, who inked a max-deal in 2016 with the intentions of leaving the Hawks to compete for a championship in Boston, this isn't what he signed up for.

All of a sudden the Celtics are rebuilding on the fly and it's understandable for Horford, 33, to want to look elsewhere when you consider how much he has to offer to a title contending team. Milwaukee, a team that blew a 2-0 lead against the champion Raptors, should be a frontrunner for Big Al.

The Bucks' top priority this summer is to lock in their All-Star shooting guard Khris Middleton, a deal that is reportedly looking good for Milwaukee and less than max-money. But if they shed salary by letting George Hill -- a restricted free agent who is only guaranteed $1 million of $18 million for next season -- walk and off-load Tony Snell and Ersan Ilyasova's contract, it should generate enough cap space to sign Horford.

Snell is on the books for $11.3 million next season, while Illyasova will make $7 million. According to New York Times' Marc Stein, Milwaukee has been trying to move both players before Thursday's NBA Draft.


Milwaukee is offering draft compensation this week in hopes of finding a team willing to take on the contract of Tony Snell or Ersan Ilyasova via trade, league sources say, as the Bucks seek to create added flexibility to retain elite status in the East
— Marc Stein (@TheSteinLine) June 17, 2019


Horford would solidify a new Big 3 in Milwaukee alongside Giannis Antetokounmpo and Middleton. It would be an upgrade from Brook Lopez and strengthen both ends of the floor, especially the defensive end.

Although the Bucks have interest in retaining Lopez, they should consider a legitimate upgrade in Horford. It could be the difference between making the NBA Finals and winning a title.

Also, Bucks head coach Mike Budenholzer has ties with Horford dating back to their days in Atlanta. The architect behind retooling Horford's game -- one that implemented a 3-point touch and led the Hawks to 60 wins -- will jump at the opportunity to ink his former big man to a new deal.

Either way, Horford will have quite a decision to make this summer as he decides which team will be best for him and his quest to become an NBA champion.