Danny Ainge is back at work, 'seems very healthy' after heart attack 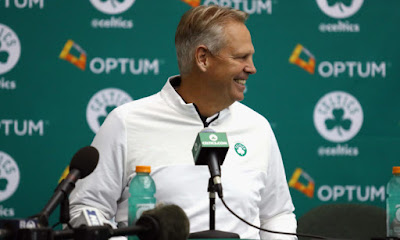 Celtics president of basketball operations Danny Ainge attended the John Havlicek celebration of life service at Trinity Church in Boston on Thursday, making it his first public appearance since suffering a mild heart attack earlier this month in Milwaukee

According to Brad Stevens, that was not the first time Ainge has been around the team. Following the service, the Celtics coach spoke about Ainge being back in his office for about two weeks now. As potential draftee workouts have begun and the NBA Draft is less than a month away, Ainge is back at work and is already looking forward to next season.


"Danny’s a tireless worker," Celtics co-owner Steven Pagliuca said. "We’re trying to make him slow down, but he seems very healthy and he's on a plant-based diet, feeling good, and we're just happy to see him back." [MassLive.com]

Ainge, who didn't speak to reporters, has a long offseason ahead of him if he plans to re-sign Kyrie Irving and potentially swing a deal for Pelicans' All-Star Anthony Davis. If either doesn't become a reality, then Ainge will surely have a back-plan in play, which more than likely involves the June 20 draft.


"We're really just going to go through the roster, the 15 guys, and say who's here, should we move some of the guys, should we re-sign these people, what are we going to do," Celtics principal owner Wyc Grousbeck recently said. "It’s really like a new movie, with a new script, and in some cases a new cast. And hopefully a new ending." [MassLive]

Despite a list of things that have to be done with the Celtics this summer, the 60-year old Ainge has to make sure his health remains a priority after suffering a second mild heart attack in 10 years.


"We want him to make sure he takes care of himself," Pagliuca said. "He’s real excited about this next year." [MassLive]