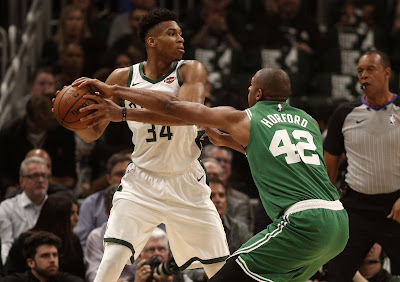 Giannis Antetokounmpo and the Milwaukee Bucks are heading to Eastern Conference Finals after beating the Celtics 116-91 in Game 5 to win their best-of-seven series, 4-1.

NBA league MVP candidate, Antetokounmpo hit a game-high 20 points to go along with eight rebounds and eight assists. The Bucks shot nearly 45 percent and finished with seven players scoring in double-figures, including Khris Middleton (19) and Eric Bledsoe (18) -- who each grabbed at least six rebounds or more.

George Hill scored 16 points off the bench for the Bucks, who will be playing in their first conference finals since 2001.

After struggling against the Celtics in Game 1 that led to a 112-90 loss, their worst defeat of the season, the Bucks responded with four straight victories by a combined 65 points to beat Boston.


"I think our mindset changed," Antetokounmpo said. "In the first game, we weren't focused enough. We weren't ourselves. The next four games, we came out with a different approach, a different mindset."

Malcolm Brogdon returned to the Bucks' lineup for the first time in the postseason after being out for over a month with plantar fasciitis, to chip in 10 points on 4-of-8 from the field.

Milwaukee now awaits the winner of the Raptors and 76ers series, which Toronto currently leads over Philadelphia, 3-2.

Offensive woes from Game 4 in Boston carried over into Wednesday night for the Celtics, as they went 29-of-93 from the floor for 31.2 percent shooting overall -- including 7-of-39 from behind the arc -- in front of a hostile crowd at Fiserv Forum.

Kyrie Irving continued his shooting slump in the series, going 6-of-21 for 15 points, while Marcus Morris (11 rebounds) and Jayson Tatum each netted 14 points for the Celtics, who will have a long offseason of uncertainty ahead of them.


"Not what we expected," Al Horford said. "Just disappointing for us. At the end of the day, really, you have to give Milwaukee credit. They're just a better team than us. That's a reality."

Irving's only made 3-pointer of the night cut the Bucks' lead to 38-32 with 2:51 left in the second quarter, as the Celtics played catch up from the opening tip.

Milwaukee led 52-39 at halftime and after Antetokounmpo picked up his third foul early in the second half he stayed in the game, the Bucks pushed their lead 65-52 with 6:45 left in the third quarter.

The Celtics would only score 10 more points, as they trailed 80-62 to start the fourth and never cut into Milwaukee's deficit the rest of the way.


"They played like they wanted it," said Irving, who was subbed out with 8:40 left to play in possibly his last game as a Celtic.

Boston's disappointing season comes to and end after high expectations coming into the 2018-19 campaign were never reached and the proverbial switch was never flipped, especially in the playoffs.


"I understand we didn't meet the outside expectations," coach Brad Stevens said. "We rode a roller coaster most of the year."

The Celtics will head into the summer with major questions to answer, including what's the future look like for Irving, who is eligible to enter free agency, along with Marcus Morris and Terry Rozier.

Celtics were out-rebounded 68-61 and outscored in the paint by the Bucks 44-36. Milwaukee also finished with seven blocks on the night.