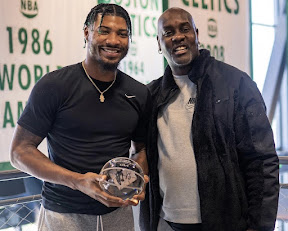 The NBA announced Monday night that Marcus Smart has taken home 2021-22 Defensive Player of the Year honors.
Smart becomes the first guard to win the award since Gary Payton back during the 1995-96 campaign and the second C's player to earn DPOY since Kevin Garnett in 2007-08.
The news comes just 24 hours following the Celtics 115-114 Game 1 victory over the Brooklyn Nets after a Jayson Tatum buzzer-beating layup -- on an assist from Smart in the final seconds.


The longest tenured Celtic is finally being recognized as the league's best perimeter defender. Smart helped anchor Boston to lead the NBA in defensive rating and scoring defense (104.6) while holding opponents to a league-low 43.4% on field-goals and 33.9% on 3-pointers. The 28-year-old veteran guard ranked seventh in the NBA in steals per game (1.68) and tied for sixth in total steals (119).
Smart received 257 total points and earned 37 first-place votes from a panel of 100 sportswriters and broadcasters. Phoenix Suns forward Mikal Bridges finished second with 202 points and 22 first-place votes.

Marcus Smart is the first guard to be named NBA Defensive Player of the Year since Gary Payton in the 1995-96 season. Smart is also the second player to win the award with the @celtics, joining Kevin Garnett (2007-08).

Utah Jazz center Rudy Gobert, who was the reigning Defensive Player of the Year in 2021, while also winning the award in 2018 and 2019, finished third with 136 points and 12 first-place votes.
In the 26 years since the last guard was named DPOY, the award had gone to centers, power forwards and bigger wings such as Giannis Antetokounmpo, Kawhi Leonard and Draymond Green. But Smart has shown he's able to guard any position, including posting up bigs in the paint.
Smart, who has two First Team All-Defense selections, was notified by Gary Payton that he had officially won this year's Defensive Player of the Year award during the end of Celtics shootaround at Red Auerbach Center.

Marcus Smart of the @celtics receives the 2021-2022 Kia NBA Defensive Player of the Year Award from Gary Payton! #KiaDPOY

He is the first guard to receive the award since Gary Payton in the 1995-96 season. pic.twitter.com/kunKEW6ujj

"When I came out and I saw GP, things kinda clicked and I saw the tweet blown up. I put two and two together and my teammates and coaching staff did a good job setting this up for me," said Smart.

Of course the Celtics guard mentioned his late mother, who Smart wished was here to celebrate this Defensive Player of the Year award with.

"She's still here in spirit looking down on me, and she helped me continue to strive and actually win this award, " said Smart of his mother.

Still, Smart also thanked the critics who after years of being a top-notch defender, has finally gotten the hardware to prove them wrong.

"Without those naysayers and what we call haters, I wouldn't be able to go out there and do what I do," said Smart with a smile. "To them I say thank you, keep it up."

On a side note, Smart's teammates Robert Williams and Al Horford finished seventh place with one first-place vote and ninth with one second-place vote respectively in the Defensive Player of the Year voting.
The Celtics host the Brooklyn Nets in Game 2 Wednesday night at TD Garden, as TNT will have the tip-off at 7:00 ET.
Joel Pavón
Follow @Joe1_CSP