Al Horford confirms he's fully vaccinated ahead of any potential series vs. Raptors 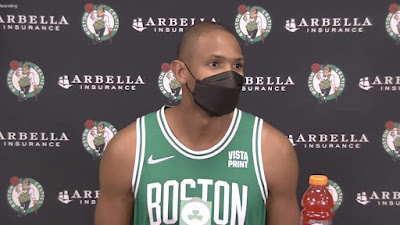 Al Horford is one less player the Celtics have to worry about if they potentially have to face the Toronto Raptors in the first-round of the playoffs.
The forward/center confirmed that he's fully vaccinated against COVID-19 in an interview with Boston Globe's Adam Himmelbach.
Horford, who missed the team's previous game against the Raptors in Toronto back on March 28 due to personal reasons, led some to question if the Celtics big man was vaccinated since a Canada mandate that was put in place on Jan. 15 prevented players that were not fully vaccinated against COVID-19 to enter the country.
Despite telling reporters two days later following a home loss to the Miami Heat that he'd be "ready to play wherever," he didn't disclose his vaccination status at that time.

"It's something I haven't wanted to discuss," Horford told Himmelsbach Friday. "I think with the Celtics, we made it clear we're not going to discuss those things, and it's a health matter, and we all respect everybody's individual perspectives. That's why I'm not going to get into it and talk about it. But I'm ready to go."

Jaylen Brown and Jayson Tatum were also absent from that last game in Toronto along with Horford, but while Tatum has stated he is fully vaccinated prior to the start of the season, Brown however, didn't share his vaccination status when asked back on April 3 -- pointing out his role on the NBPA's board as the reason behind not answering the question.

"Last year, I missed the playoffs -- I had a season-ending injury with my wrist," Brown said during his postgame presser following Sunday's win over the Wizards. "This year, from a competitive standpoint, I'm excited and ready to play against anybody. As a vice president of the Players Association, it's a part of my job description to protect our players' rights and our medical privacy. So you won't hear me commenting on my status or anybody else's. That's how I feel about it."

The Raptors have clinched the fifth seed in the East after their win Friday over the Houston Rockets. The Celtics (50-31) could potentially face them in the first round if they fall to No. 4 seed, which Boston would do if it loses Sunday's finale to Memphis and Philadelphia wins its final two games of the regular season. If the Celtics stay at the No. 3 spot (or move up to No. 2), they wouldn't face the Raptors until the Eastern Conference Finals should both teams even make it that far.
With Robert Williams (partial torn meniscus) out at least for the first-round of the playoffs regardless of who the Celtics draw, Al Horford is a vital piece of what Boston does on both ends of the floor. In his return to the C's, Horford is averaging 10.1 points, 7.7 rebounds per contest this season and since the All-Star break he's bumped his shooting percentages to 52.8% from the field and 41.9% from deep.
Joel Pavón
Follow @Joe1_CSP