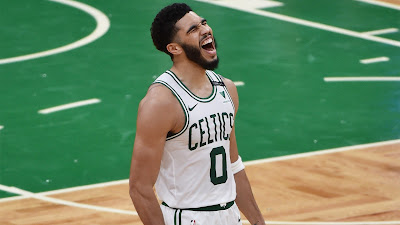 Celtics All-Star Jayson Tatum was not named to any of three All-NBA's Teams, after the league released those that were honored Tuesday night.
The 23-year old will not be eligible for a $32 million bonus to his rookie extension he signed last offseason. Tatum would have been qualified to receive 30% of the NBA salary cap -- also known as the "Rose Rule" -- if he made one of the three All-NBA teams, but will now make 25% of the cap for the duration of the deal that will kick in at the start of the 2021-22 campaign.

Jayson Tatum finishes seventh among forwards, does not make an All-NBA team.

Could have been worth $195.6 million if he made one of three teams.

Tatum's five-year deal is now worth $163 million instead of $195 million and he's set get a pay raise from $9.9 million in 2020-21 to $28.1 million next season, $30.3 million in 2022-23, $32.6 million in 2023-24, $34.8 million in 2024-25 and $37 million in the final season -- which is a player option should he opt into the last year of the contract in 2025-26, per Sports Trac.
The Celtics rising star finished seventh among forwards behind Giannis Antetokounmpo, Kawhi Leonard, Julius Randle, LeBron James, Jimmy Butler, and Paul George. Tatum totaled 69 points, the highest among remaining forwards, but 20 points behind George, who didn't get any first team votes.
Tatum did receive two first team votes, nine second team and 32 third, while Kyrie Irving had the least amount of points with 61, but made the third team as a guard.

The voting results for the 2020-21 All-NBA Team are below ⬇️ pic.twitter.com/TQ7thkKhDI

While Tatum not being selected All-NBA gives the Celtics some cap flexibility, he did have his best season as a pro averaging 26.4 points, 7.4 rebounds and 4.3 assists per game -- all career-highs -- while shooting 45.9% from the floor, 86.8% on free throws and 38.6% from 3-point range.
The fourth year forward tied a franchise record of scoring 60 points in an overtime come from behind win over the San Antonio Spurs on April 30, the most since Larry Bird accomplished the same feat in 1986. Tatum also made his second straight All-Star team (replacing Kevin Durant as a starter) and won Player of the Week honors on three different occasions this past season.
Earlier on Tuesday, Chris Haynes reported that Tatum had committed to play for USA Basketball in next month's Tokyo Olympics -- he'll become the first Celtic to compete for Team USA since Bird was a part of the Dream Team during the 1992 games in Barcelona.