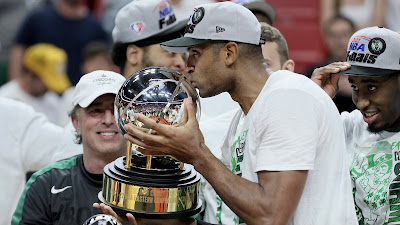 Al Horford has had an emotional week after losing his grandfather and making it to the NBA Finals for the first time in his 15 years as a pro.
The Celtics veteran held the record with the most playoff games played at 141 without reaching the NBA Finals. Unfortunately, his grandfather José Reynoso Núñez passed away at the age of 81 Thursday before Game 6 of the Eastern Conference Finals and he wasn't able to witness this incredible feat.

"You know, it's been difficult for me and my family," Horford said following Game 7. "My grandfather was somebody that I was extremely close with, somebody that I really care for, and all week my mom, my family just kind of telling me to just go out there and play, that's something that he would have wanted me to do, to just continue on and really just try and stay focused and understand that he's at peace now."

Horford and the Celtics narrowly escaped with a 100-96 win against the Miami Heat in a decisive Game 7 Sunday night, to finally get over the hump to clinch an NBA Finals berth after four attempts in the last six years, as they now prepare to face the Golden State Warriors.

"Nobody deserves it more than this guy on my right here, man," Jaylen Brown said of Horford during his postgame presser. "I'm proud to be able to share this moment with a veteran, a mentor, a brother, a guy like Al Horford, man. He's been great all season, really my whole career."

With the Celtics reaching the NBA Finals Horford has also earned an extra $5 million towards his salary for the 2022-23 season, bringing his guaranteed salary for next season from $14.5 million to $19.5 million. The big man, who's the first Dominican Republic born player to appear in the NBA Finals, would gain even more money if the C's were to win it all.
Horford's $26.5 million salary for the 2022-23 campaign was set to become fully guaranteed if Boston were to beat the Warriors -- the last season of a four-year, $97 million deal he signed with the Philadelphia 76ers back in the summer of 2019.
According to Brian Robb of MassLive, the Celtics plan to bring Horford back next season and fully guaranteed his $26.5 million salary regardless of the NBA Finals outcome.
Horford, who will be 36 on June 3, played a major role for this Celtics roster this year once he was acquired last offseason for the often injured Kemba Walker -- the first major move of the team's new president of basketball operations in Brad Stevens. Despite a down year in Philly and being apart of a rebuilding effort in Oklahoma City, Horford had a resurgence this season averaging 10.2 points and 7.7 rebounds per contest in 69 starts for the Celtics, which bled into the playoffs.
With the Celtics down 2-1 to the Milwaukee Bucks, Horford recorded a career playoff-high of 30 points on 11-of-14 shooting to help even that second-round matchup and eventually advance. He's been a key contributor to Boston getting through back-to-back seven game series.

"Coach Udoka was very clear what he wanted us to be as a team, our identity, defensively, hang our hat on the defensive end," Horford said. "And on offense, play freely, use Jaylen [Brown] and Jayson [Tatum] and just kind of just go. And us understanding and buying into that. It took us a while, but I feel like once we started to understand how we needed to play, we became more consistent.

"This journey is not easy. We had a hard path. Brooklyn, Milwaukee, the defending champs, and Miami is a team that… look what they did, they took us to the brink. For our group it's resiliency, it's switching the page, moving on to the next thing, and we did that all season, and I really noticed it, and I was telling this to JB (Jaylen Brown), but it was like February, early February, that I just noticed how we started to click.

"People were like, well, you guys are beating teams that have guys out, guys are hurt and all these things, and I was like, it doesn't matter, I’m seeing something different in how we're playing. That’s how we're just going to carry it on, and that's what we've been doing."

After making it the Eastern Conference Finals two previous times with the Celtics in 2017 and 2018, only to fall to LeBron James and the Cleveland Cavaliers both times, Horford many times has expressed how "very grateful" he is to be back in Boston -- a place he always wanted to be.
Horford wasn't the only Celtic to receive an incentive with the C's making it to the NBA Finals. Per ESPN's Bobby Marks, Jaylen Brown made a $964,286 bonus after Sunday's win and is set to make an undisclosed amount if Boston wins the championship. The Celtics also become a tax-paying team if they win the title, as they're currently $358,000 below the luxury tax line.
Game 1 of the NBA Finals will tip-off  from the Chase Center Thursday night at 9:00 PM ET on ABC.
Joel Pavón
Follow @Joe1_CSP