Gordon Hayward plans to leave Orlando for birth of his child 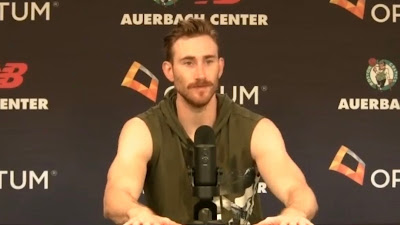 For Gordon Hayward, deciding to head back home to witness the birth of his child instead of potentially playing in deep playoff games in Orlando was an easy one.

The challenges for Hayward and the rest of the Celtics teammates await them in Orlando as they gear up for the NBA to resume in a quarantined bubble. And if the Celtics find themselves in the Eastern Conference Finals -- which is schedule to begin the week of September 11 -- they're most likely going to have to compete without Hayward in the lineup.

Hayward's wife, Robyn Hayward, is due to give birth to their fourth child in September. While answering a question about growing concerns about Orlando, Hayward announced Friday afternoon at the Auerbach Center that he will be taking time to head back to Boston to witness his first and only son take his first breath of air.

"There's definitely a lot to think about, certainly," Hayward said. "Also, with my wife being pregnant, there will be a time if or when we're down there and she's going to have the baby, I'm for sure going to be with her. We'll have to cross that bridge when we get there. It's something where competing for a title I guess is the number one thing here."

"It's a pretty easy decision for me on that," Hayward added. "I've been at the birth of every one of my children. I think there are more important things in life. Like I said, we'll cross that bridge when we get there. The NBA has a protocol in place for that type of thing and hopefully I can do the quarantining and testing the right amount of time and then be back with the boys."

While the NBA is allowing excused absences for extenuating circumstances, there's no exact timetable for when Hayward would be allowed to rejoin his team. He would have to undergo daily testing and complete a four-day quarantine before returning to the floor.

In the meantime, Hayward is dreading next Wednesday -- when the Celtics will fly out to Orlando -- when he'll have to say goodbye to his three daughters and redirect his focus to reuniting with his teammates and competing at a high level.

"It's going to be tough; it's going to be hard. No doubt about it," Hayward said. "I think leaving the girls is going to be hard and I'm sure a sad day for me. I think they're old enough to the point now where they do understand what's going -- we've tried to explain to them that I'm going to be gone for a little while. It's something where it kind of is what it is. The opportunity to compete for a championship, compete for a title is something that I think a lot of us NBA players, we want to do. We want to go down there and continue the season, try to finish something that we worked for all year."