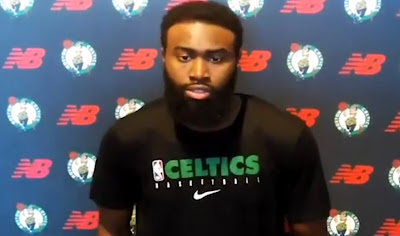 Jaylen Brown was just about done with his video conference call with the media before he sat back down to speak about Breonna Taylor and systemic change.

Brown expressed how conversations still need to be had about social injustice and police brutality regardless of how uncomfortable those topics may be. The Celtics forward continues to use his platform to spread awareness and hopefully promote change.

Brown, who led a peaceful protest in Atlanta two months ago following the death of George Floyd, doesn't want the message to be ignored as the NBA is set to resume its season next week.

On Sunday, Brown concluded his presser with reporters by discussing and sharing his thoughts on the death of Breonna Taylor.

Taylor was shot and killed in March by four Louisville Metro Police officers who executed a no-knock warrant for her apartment, a law that has since been changed (referred to as "Breonna's law")  following a unanimous vote by the Louisville’s Metro Council to ban it altogether.

Taylor was not the target of the warrant, but was shot eight times from the more than 20 shots fired by the LMPD officers. Her boyfriend Kenneth Walker, who has a license to carry a firearm, thought the officers were intruders breaking in and shot back -- Taylor was the only one killed in the exchange of gunfire.


"I know it's a hot topic in conversation," Brown said on Sunday. "I guess where the line is drawn, or where the outrage comes from is you look at the case. You look at since things settled down, Louisville has abolished the no-knock warrant where now you have to knock if you have a warrant instead of just breaking into somebody's home."

It was later reported in Taylor's case that the officers had the wrong home when executing their warrant.


"I understand the protocol that the officers have to follow, but I think a lot of people's problems aren't just with the officers, it's with the establishment."

Brown, along with so many other athletes around the nation and globe have called to address police brutality with the recent deaths of Black men and women at the hands of police officers, who in most cases have been videotaped causing the individual's deaths. Brown and others want to make it a point to discuss systemic change every chance they get.

Brown added, "For us, equality is demanded and Black Lives Matter. And Breonna Taylor is an example of a Black life that was taken because of how the system has been laid out. And we're going to continue to protest and continue to feel some type of way about it. It's unfortunate, but these conversations need to continue to be had, for sure."