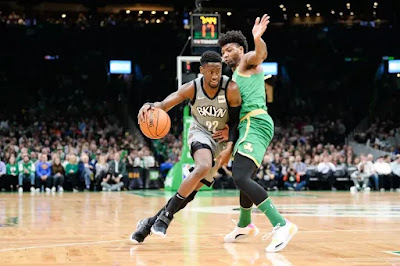 The Celtics turned in their most disappointing loss of the regular season in historic fashion Tuesday night at TD Garden.

In what appeared to be a landslide Celtics win in the making, turned into a 129-120 nightmare overtime loss. Boston cruised to a double-digit lead before a pair of Brad Stevens' key players suffered injuries that kept them sidelined for the night.

It started with Gordon Hayward, who suffered from a knee contusion just before halftime, and continued with Jaylen Brown, who strained his hamstring in the beginning of the fourth quarter. With Jayson Tatum home sick and Kemba Walker, who was playing in his first game since All-Star break, on a minutes restriction, Brad Stevens and the Celtics still secured a double-digit lead into the second half before the Nets finished off a 21-point come back that no one saw coming.

In fact, no one could have foreseen Caris LeVert's career-night unfold into one of the greatest performances by an opposing player at TD Garden. While the Celtics were shorthanded, it was still no excuse for this colossal collapse.

It doesn't excuse Boston's defense for allowing 51 fourth-quarter points, LaVert's 26 points in the final frame and 11 in overtime. LeVert outscored the Celtics in the fourth quarter and extra period combined (37-36), including three clutch free-throws after Marcus Smart committed a foul on LeVert while the Nets guard was shooting from behind the arc.


"We din't have any defensive intensity," Stevens said after Tuesday's loss. "You know, I should've subbed a couple of guys out that normally play and I just kept them in and we had great intensity for most of the game and we just let our foot off the gas. But we got four stops in the fourth quarter -- they scored 51 points. You know, the game's 48 minutes.

"We made a lot of plays late that were just not winning plays and pretty simple, basic parts of our defensive system but they deserved to win. And I guess if you're in this game long enough you'll see it at some point and so we saw it tonight."

LeVert's career-high 51 points is the most scored by an opponent in a winning effort at TD Garden (since 1995). He went bizzerk, he shot 65.4 percent on 17-of-26 from the floor, including 5-of-10 from deep. Spencer Dinwiddie added 14 points, Timothe Luwawu-Cabarrot added 16 and DeAndre Jordan pulled down 15 rebounds and finished with a plus-29 player rating.

Given the injuries to Hayward and Brown happened throughout the course of the game, Stevens couldn't provide a clear update for their status against the Cavs Wednesday night, the second leg of the Celtics' back-to-back set and took the opportunity to rip into his team again.


"I have no idea who's going to Cleveland," Stevens said. "I think most of the coaches are going, couple players. I just want eight guys, nine guys -- whoever's going to play hard, let's go. Like, that was ridiculous. No, Brooklyn deserves credit and I hate to say it that way because they really deserve credit.

"Those guys were in the game for Brooklyn, like, LeVert's special, obviously, but those other guy, too -- they were really engaged and they deserve credit for that."

Brown scored a team-high 22 points in over 34 minutes before his night ended, Walker scored 21 just before clocking in 23 minutes, his limit for the night that was reached just before overtime and Daniel Theis added 16 points.

The Celtics will look to avoid dropping their third game in a row when they take on the Cavaliers Wednesday night.

Tuesday's loss is only the fourth time in franchise history that the Celtics have lost a game after holding a 17-plus point lead after three quarters.