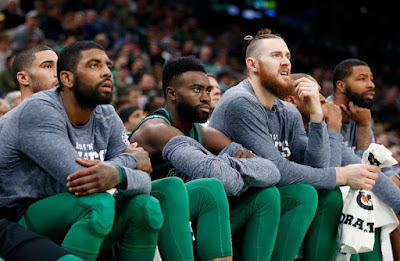 It's been a mere 20 days since the Celtics season came to and end at the hands of the Milwaukee Bucks, who are now sitting at home, as the NBA Finals are set to begin Thursday night between the Toronto Raptors and the defending champions out in Golden State.

While there are those still wondering what happened to the Celtics, who had high expectations of making it out of the Eastern Conference this year to face the mighty Warriors and fell well short.


"I know my heart’s still here in Boston. I love Boston. It's been great to my family," Baynes said at a Shamrock Foundation charity event last week. "There's no better place to play than TD Garden during the playoffs or when you're in the middle of a comeback. So if I’m thinking of that, I know where I want to be. But at the same time I've got to talk with Danny, I've got to talk to Brad and see what their thoughts are as well. I want to be in the right situation." [MassLive]

Baynes, who has a $5.4 player option for next season, offered some insights on why the Celtics couldn't gel which led to their second round playoff collapse against the Bucks.


"I don't think we built the right habits throughout the season. Everyone kind of focused on the playoffs and there was a lot of talk about when we get there we'll be right, we'll be able to play. But you can't just flick a switch and play the right way," Baynes told John Karalis of Mass Live. "You need to set it up throughout the regular season. You need to go out there and do it as a team and grind out a routine and we weren't able to do that at any point this season consistently. We had glimpses of what we could do when we play well as a team but night in and night out it wasn't the norm for us."

Despite Baynes struggling with injuries such as a broken hand, sprained ankle and a foot contusion, he was a vital piece to the Celtics frontcourt, especially towards the end of the regular season and against the Pacers in the first round.

Baynes spoke about how frustrating this past season was for him on the most recent episode of CLNS Media's Celtics Beat Podcast with Adam Kaufman.


"We had a lot of talent but we just couldn't find a way to play as a team throughout," said Baynes. "When we did manage to play as a team you saw glimpses of how good we could be, but at the end of the day we didn't manage to accomplish it night in and night out."

When asked if some of his teammates simply didn't buy into what Brad Stevens was selling the same way they did the year before, Baynes believed that were moments throughout the season that they collectively as a team tuned out their coach.


"I definitely think that Brad's system is great. I'm a big believer in what Brad wants us to do. I’ve seen how good of a coach he is. I've seen how much he enhances guys abilities when they are playing for him," Baynes said. "I think there were sometimes where we didn't buy into his system fully and that hurt us. Because when did, when we live within Brad's system both offensively and defensively we look really good and we did the right things."

There should be no surprise when it comes to some of what Baynes had to say about the kind of season the Celtics just went through. Being one of only two players in that locker room who's been on a championship roster, winning a ring with the 2013-14 Spurs, Baynes knows a thing a two about wanting to be apart of tradition.


"There's only one thing you can look to achieve when you come to Boston," he said. "With the legacy they have here, you want to add to that legacy." [MassLive]


You can enjoy the rest of Baynes' appearance on Celtics Beat below: