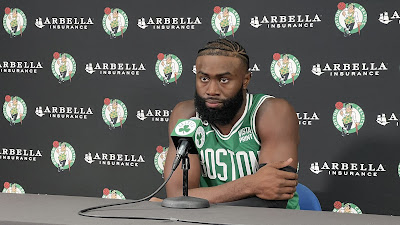 Jaylen Brown is entering his seventh year as a pro -- all with the Celtics -- and has never been a stranger to trade rumors during his time in Boston.
The 25-year-old wing has been attached to All-Stars names like Jimmy Butler, Paul George, Kawhi Leonard and now Kevin Durant. While the Celtics have yet to pull the trigger on any sort of trade for any of those players, they instead have placed trust in Brown to which has paid off.
Brown averaged 23.6 points, 6.1 rebounds and 3.5 assists per-game this past season, as he help lead the C's to an NBA Finals berth (the first since 2010), arguably being the team's best performer against the Golden State Warriors.
Still, in an offseason that saw upgrades to the roster and a head coaching change (at least temporarily for the upcoming 2022-23 campaign), Brown wasn't surprised when his name was being tossed around in a possible trade for Durant this summer.

"It's been the same since I've been here, so it wasn't surprising or it wasn't not surprising," Brown said Monday at Media Day, addressing reports of a proposed trade for Durant. "It didn't make me feel one type of way or whatever. It is what it is."

When asked if he had spoken to the Celtics front office about where he stood within the organization after Durant essentially rescinded his trade request, Brown seemed more focused on talking about basketball, while also "excited to start the journey" this upcoming season -- rather than discuss another trade rumor with reporters.

"Yes and no," Brown said. "I've talked to my teammates, I've talked to ownership, organization, etc. I keep those conversations between us. All I can say is that now that I'm here, I'm ready to play basketball. I'm in great shape, probably the best shape of my life, so I'm excited to start the journey. Things haven't gotten to the start that we wanted it to go, but that's life sometimes, so put our best foot forward and do what we've got to do."

This will be season three of Brown's current four-year, $106 million deal -- which makes him eligible for an extension come October 1st -- but it's most likely he'll wait until the summer of 2023 where he could command max dollars when the NBA's new TV deal kicks in.
But whether Brown signs a new contract this weekend or next offseason, the young star has already settled in his role when it comes to the Celtics' expectations of returning to the NBA Finals.

"I think [it's about] responsibility. Every role that this organization has given me, I've pretty much accepted it, taken it, and knocked it out of the park," Brown said. "I look at it as, if you put me in any role or position and you give me time to acclimate myself, I can do it and help make my teammates better and help us win games. Over time, it's just been given to me little by little for whatever reason, but it's actually propelled me to be better and more efficient and be a better leader, because I can relate to guys going through the same thing."

If you have been paying attention the last few months to Brown's offseason workouts, that include putting on some muscle in the gym or training in the pool, it's clear he's motivated in what could be a monster season -- and the Celtics are about reap the benefits.
Joel Pavón
Follow @Joe1_CSP