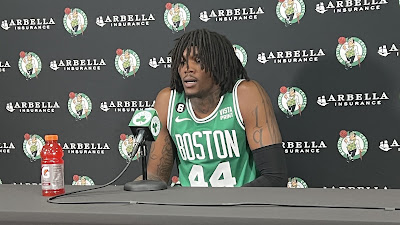 Robert Williams was present at Media Day Monday afternoon to address the arthroscopic procedure on his left knee that will keep him sidelined 8-12 weeks.
The Celtics big man was asked what led to the surgery -- the second on the same repaired knee in the last six months -- and why the decision was made so late in the offseason.

"Just some recurring problems," Williams explained. "Obviously, it took a toll on me mentally. I want to be there. But all I can focus on is rehab now. Getting back on the court."

Williams, 24, has battled injuries throughout his four-year career since being selected late in in the first round of the 2018 NBA Draft by the Celtics. He's played in only 174 games over the past four campaigns, surpassing the 60-game mark once which was last season (61), while averaging 10.0 points, 9.6 rebounds and 2.2 blocks per-contest.

"Mentally, it's one of my better days," Williams explained. "Just realizing the trust I have in this team with my rehab process and the processes I've been through with them a couple times. Feeling good today, seeing all the guys together and stuff. It's a battle, it's tough, but I'm here for it. I'm ready to get back out there."

Still, despite becoming one of the league's premier defenders (named to the NBA's All-Defensive Second Team) this past year, Williams sustained a partially torn left meniscus that required surgery back in March, which may be the cause of his current knee issues. Though he returned in less than a month to help the Celtics eventually reach the NBA Finals, Williams ended up missing a total of seven games throughout that playoff run.

"We all know I was battling through injuries through the end of last season. That's just what it is," Williams said. "I made a decision as a man to keep playing. That's my decision, regardless of the recurring injuries, whenever they did happen, I bought into that decision. I feel like that’s the biggest thing to just me being there mentally, get myself ready, get myself back and put my 100 percent rehab in is all I can focus on, all I can talk about."

While Williams was able to play in the postseason, some nights he was limited due to his knee and his minutes dropped from nearly 30 minutes per-game in the regular season to just over 23 during the playoffs. It was clear that rest was needed to better rehab his surgically repaired meniscus.

"I was playing on it last year," Williams said. "It had instances where I had to give it time, the rest. I just feel like it never got back to what it was. Bottom line. So, I just want to be 100% with rehab. Do things the right way."

With this current timetable being longer than the initial 4-6 weeks that was reported, Williams says he has no regrets for returning last and helping his team make a deep postseason run.

"No… I played in the Finals, man," Williams said with a smile. "You win some, you lose some, but I don't regret my decision at all. I was 24 years old, my dream was to play in the Finals. Can't regret that shit."

Boston will have to figure out life without Williams for possibly the next 2-3 months, in the meantime, training camp should serve as an opportunity for those like Luke Kornet and Mfiondu Kabengele to step up when it comes to frontcout depth, along with invites Noah Vonleh and Luka Šamanić to fight for possible roster spots.
Joel Pavón
Follow @Joe1_CSP