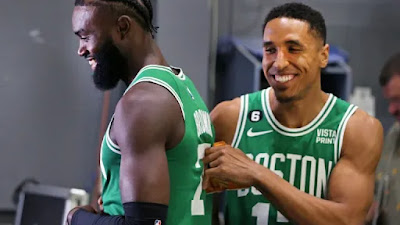 Malcolm Brogdon had some options during the offseason before being traded from the Indiana Pacers.
According to the Brogdon, who signed a two-year extension with Indy in October of 2021, he got to chose his destination and picked Boston due to the ties already established with the Celtics. The veteran guard was recruited by Brad Stevens to Butler in college, but decided to end up at Virginia and he's also one of the vice president of the Players Association along with now teammate Jaylen Brown.
But above all, Brogdon wanted to win and he saw the Celtics as his best chance to accomplish that, even if he has a diminished role than what he's been use to during his six-year NBA career.

"It doesn't matter if I'm the sixth man, whatever role I'm playing," Brogdon during Media Day Monday. "I'm going to accept it and I'm going to go out there and embrace it. I want to add on to what this team has. This team has a great unit, great chemistry.

"They were on the verge of winning a championship as we saw and they needed a little bit more. So I'm going to come and add-on to what's already going on."

Brogdon expects to come in and add to the Celtics already defensive mentality, especially in the backcourt with the reigning Defensive Player of the Year in Marcus Smart, Derrick White and Jaylen Brown. With other quality defenders on the roster like Al Horford, Robert Williams, who was selected All NBA Defensive second team and of course Jayson Tatum, Brogdon believes he'll fit right in.

"Jaylen and Jayson that make the game easier for us and take the pressure off of us on both sides of the ball, but those guys' roles are to lead this team on offense and to score the ball and to be the monsters they are," Brogdon said. "Our job as a backcourt is to make it easier for them to defend when they need to focus on offense and be great defensively and support them offensively."

The former Rookie of the Year also noted that he doesn't anticipate any issues to arise between him and the starting point guard Smart, who have both had a friendly relationship over the years. Brogdon says the two have connected since his arrival in Boston and are eager to get to work.

"Since I've gotten here, he's been great," Brogdon said. "He's been terrific. I think people build up a feud between us about 'They're bringing in a point guard,' yada yada.
"At the end of the day, me and Marcus are going to be on the floor a lot together, playing together. Me and Marcus have different strengths, work really well together. And we're both really competitive and are going to push each other and help each other."

While Brogdon was brought in to provide scoring and playmaking off the bench for the Celtics, his experience and willingness to play whatever role is asked of him is only going to be a plus to team coming off a trip to the NBA Finals.
Joel Pavón
Follow @Joe1_CSP