Malcolm Brogdon on trade to Celtics: 'We have a chance to win the championship, I'm excited to join the family' 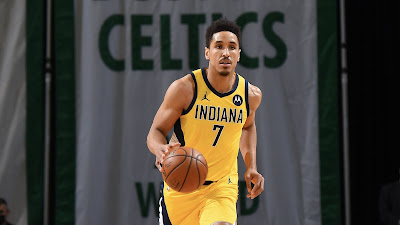 The Celtics have acquired their veteran point guard in Malcolm Brogdon, following a deal with the Indiana Pacers Friday afternoon.
According to Boston Herald's Mark Murphy, Boston plans to bring in the former Rookie of the Year as a sixth man rather than replace Marcus Smart in the starting lineup.
The current longest tenured Celtic became the team's starting point guard this past season that ended with being two-wins shy of an NBA championship. Smart's new role has come into question over the past few weeks since the C's loss to the Golden State Warriors in six games.
Smart addressed those who still doubt him and his ability to be the Celtics starting point guard in a recent interview with Boston Globe's Adam Himmelsbach.

"I think I proved a little bit of everything," Smart told Himmelsbach earlier this week. "I hear the talks about 'He's not a true point guard’ and this and that. 'They need a star point guard.'
"We've had star point guards, and yet this so-called non-point guard is the only one that's led them to the Finals. I think that right there says enough. I don't really need to say too much more. I think everybody sees and understands, finally, the person I really am, and what I can do given the opportunity."

Meanwhile, Brogdon appears to be aware with what his role will be once he arrives in Boston and it's also clear he just wants to win.

"I'm looking to win a championship, that's actually it," Brogdon told The Athletic on Friday. "In the past, I've worried about stats and numbers and all that. I'm going to Boston and not worrying about [stats]."

The Celtics add another proven playmaker in Brogdon, who has plenty of playoff experience.

"If I came in there, I could give them a steady presence and a calm as a ballhandler and facilitator, getting guys like [Jaylen] Brown and [Jayson] Tatum easy shots," Brogdon said. "Just slowing the game down in those moments when we need to get a good shot."

Aside from being a veteran playmaker, Brogdon is also a scorer and a shooter, something Brad Stevens said was a priority to find this offseason. The 29-year old averaged 18.9 points and 6.3 assists in 146 games with the Pacers over three seasons as the team's starting point guard.

"I had heard that Boston was interested over the past few days, but as a player, you don't know everything that's going on," said Brogdon. "You just have to sit tight, let your agent work, let your team work, and then let the team that wants you, work as well. The Pacers were really good at facilitating a deal and sending me somewhere I could win."

"I am very much appreciative of how the Pacers have handled everything," he added.

With Brogdon, who joined the 50/40/90 club in his final season with the Milwaukee Bucks (2018-19 campaign), being added to the Celtics' second unit, that means Ime Udoka's current starting-five will stay together after arguably being one of the best in the league this past season -- while now having upgraded their depth -- as they look to make another Finals run.

"I'm excited, man," Brogdon said. "We have a chance to win the championship, so I'm excited to join the family."