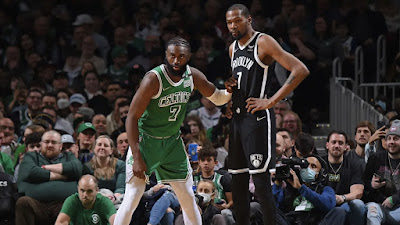 It has been a busy week surrounding reports that the Celtics not only engaged in talks with the Brooklyn Nets on a potential swap for Kevin Durant, but also made an offer that included Jaylen Brown.
According to Shams Charania of The Athletic, Boston's reported trade package was Brown, Derrick White and future draft pick for Durant, to which the Nets rejected.

"Brooklyn has asked Boston -- in any proposal -- to include Brown, Defensive Player of the Year Marcus Smart, draft picks, and potentially one more rotation player; those sources added," per Charania. "Currently, the Celtics are less inclined to include Smart along with multiple other player assets or pick assets, but the franchise is mulling over next steps on how to approach discussions."

While Celtics All-Star Jayson Tatum and legend Paul Pierce may not necessarily believe the trade rumors involving Durant, the Nets reportedly have their eye on not only Brown but Marcus Smart and another player in any future proposals Boston may make.
With the Celtics adding guard Malcolm Brogdon and veteran sharpshooter Danilo Gallinari earlier this month, it had appeared team president of basketball operations Brad Stevens was near done making improvements to his roster, who was just two wins from an NBA title this past season.
Still, with Durant being shopped around, many teams (Suns, Heat, Raptors and now apparently the Celtics) have inquired on what's Brooklyn's asking price on the soon to be 34-year-old former league MVP and are they willing to meet it.
Josue Pavón of CLNS Media reports that an anonymous NBA source says that the Celtics didn't make a trade offer last weekend. But, Boston, along with other teams should at least consider what a possible trade for one of the best scorers of all-time in Durant may look like.

"If I were Boston, I would just leave it alone and let that team grow," the NBA source told CLNS Media. "They look good already this year. But, I mean, what team in the league wouldn't want to look into getting Kevin Durant? You'd be absolutely moronic not to look into it."

The Miami Heat, who took the Celtics to Game 7 of the Eastern Conference Finals this past spring, looked to trade for Durant to put them over the hump after making it to the championship round back in 2020. However, due to a league rule that doesn't allow a roster to have more than one player on rookie max-extension deals, both Bam Adebayo and Ben Simmons can't be on the same team.

"Talks between the Heat and Nets only stalled because of Bam Adebayo," the NBA source said. "Miami didn't want to give up its star center without getting one in return. The Heat even entertained the thought of bringing in Ben Simmons, you know, getting a third team involved to make the Durant trade work. They don't want to lose Bam without getting a valuable center in return."

Still, it may seem that Brown is the best trade chip of what any team can offer, meaning if Stevens is indeed looking to meet the Nets' asking price how much more would need to be added in another possible offer and is it even worth it?
Brown, who is eligible for a contract extension before the start of the upcoming season, has two years left on his current deal worth $55.2 million. The Celtics wing is coming off a 2021-22 campaign that saw him average 23.6 points, 6.6 rebounds and 3.5 assists in 66 games played, while helping the C's reach the NBA Finals for the first time since 2010.
Meanwhile, Durant is set to make $44 million this season, the first of a four-year, $194 million extension he signed last summer. If Celtics fans are worried about one of the league's top-75 players of all-time disrupting the current roster's chemistry, especially when it comes to his very well-known social media posts, the anonymous source believes that won't be a distraction if Durant were to land in Boston.

"I know Durant. I mean, I'm not best friends with him," the NBA source added. "But I've spoken to him on several occasions, and I've talked to friends of his; he's a really good guy. He doesn't have a reputation for causing problems."

Ultimately, it would be a fresh start for both Brown and Durant if Stevens were to meet the Nets' reported trade offer rebuttal.
Stay tuned.
Joel Pavón
Follow @Joe1_CSP