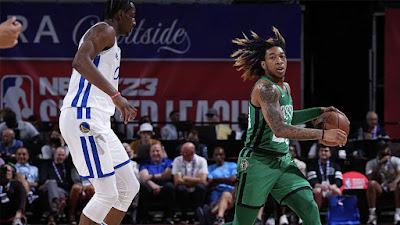 The Celtics beat the Golden State Warriors 103-92 in a wire-to-wire win and on a second night of a back-to-back Tuesday at the Thomas Mack Center in Las Vegas.
It wasn't exactly Game 7 of the NBA Finals but it seemed like some sort of revenge, despite it being a Summer League tilt. Justin Jackson, who was just added to the roster on Monday, led Boston with 24 points on 5-of-10 from deep.
Mfiondu Kabengele recorded yet another double-double of 20 points, 13 rebounds, while Juhann Begarin finished with 21 points. Brodric Thomas added 18 points and was 4-of-7 from behind the arc to help the C's improve to 2-1 in Vegas.
JD Davison had a game-high nine assists to go along with his 11 points. Matt Ryan, who was the hero Monday in the Celtics' 111-109 victory over the Milwaukee Bucks, had the night off with an ankle injury he suffered on the game-winning 3-pointer.
Jonathan Kuminga was the game's leading scorer with 29 points on 11-of-22 from the field to lead Golden State. Moses Moody netted 21 points, while Gui Santos chipped in 12 for the now 1-2 Warriors.
Boston jumped out to a 38-18 advantage to start the game, after Thomas and Jackson each scored 11 points apiece in the opening quarter, before the Celtics led by as many as 23 points in the second period.
Both Thomas and Jackson hit a combined 9-of-17 from 3-point territory on the night, while Boston was 13-of-30 overall from long-distance.
Even without two of the C's best shooters in Ryan and Sam Hauser (shoulder) out with injuries, the Warriors -- who have plenty of lottery talent -- were never in this one, despite cutting the deficit to single digits late in the fourth quarter.

"They have a good team, they've played well so far, and it was a good test for us to go out and it was fun to watch [Mfiondu] and James," Celtics Summer League coach Ben Sullivan said in his postgame presser. "It was a good time."

The Celtics are back in action Thursday afternoon when they face the Memphis Grizzlies at 3:30 ET on NBATV.
Joel Pavón
Follow @Joe1_CSP