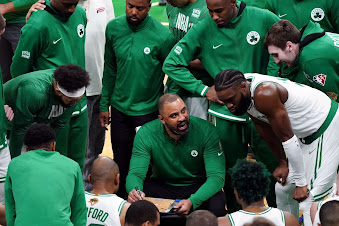 The Celtics' impressive second half of the season turnaround that yielded a deep playoff run all the way to the NBA Finals has come to an end following a 103-90 loss in Game 6 to the Golden State Warriors Thursday night at TD Garden.
Despite clinching a berth in the championship round for the first time since 2010, the C's came up two-wins short of what would have been a league leading 18th NBA title and their second in the last 36 years.
Ironically, what plagued the Celtics for much of the first half of the 2020-21 campaign, which included committing costly turnovers, giving up too many offensive rebounds, being stagnant and having no rhythm on offense, was what hurt them in the biggest moment of the season, while trying to force a winner-take-all Game 7 back at the Chase Center.

"Just be better," Jaylen Brown said after the loss when asked about what went wrong for the Celtics in Game 6. "Offensively, we were not good this series. Give credit to the Warriors. They forced us into doing stuff that we didn't want to do, and that resulted in turnovers, et cetera. At times, we just got to be better. That's it."

In an elimination game at home and with the season on the line, the Celtics committed 23 turnovers that led to 20 points for the Warriors and they failed to reach the 100-point mark for the fourth time this series -- which all resulted in losses.
Outside of their 14-2 lead to start the night and hitting 11-of-28 (39.3%) from deep, the Celtics never got into any kind of flow offensively, as they shot 42.5% from the field and played from behind, trailing by as many as 22-points once the Warriors responded with a 35-8 run to get back in front for good.

"You tighten up and do some things offensively, it's a different story," head coach Ime Udoka said during his postgame comments when asked if the team needs to add this offseason. "So winning two games, falling two short, even tonight with a great start, then letting that go a little bit. It’s a 13-point game. They score 103. There was just a lack of overall offense."

While the Celtics shot the 3-ball at 40.8% compared to the Warriors' 36.7% from 3 in six games, it was Golden State's scoring in the paint which made all the difference when it came to two-point field goals throughout the series -- connecting on 51.8% with Boston only hitting 45.6% inside the 3-point arc.
Jayson Tatum's struggles offensively, especially with his insufficient shooting on two-point attempts, was the main reason for the Celtics All-Star hitting 10 or more field goals only once in his first Finals appearance.

"It hurts. We all could've done things better. I feel like I could've done a lot of things better," Tatum said during his postgame presser on coming up short in the NBA Finals. "But like we said, we competed, we tried all season, all playoffs. Take some time off, enjoy it with your family, rest, and then get back to it."

If this Celtics group, who looked more like a work in progress instead of contending roster five months ago, can take anything away from this loss in their first taste of the NBA Finals, the hunger to win it all should be even greater now as they look to re-group and get another shot at winning banner 18.
Joel Pavón
Follow @Joe1_CSP