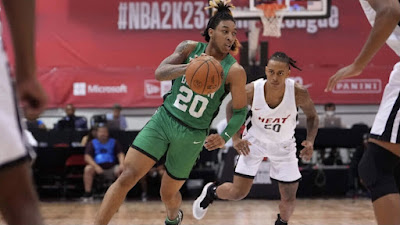 The Celtics announced the signing of rookie JD Davison to a Two-Way contract Saturday afternoon.
After making the trade for Malcolm Brogdon official plus, announcing the re-signings of Sam Hauser and Luke Kornet, the C's have agreed with their 2022 second-round draft pick to a Two-Way deal.

We have signed @jddavison10 to a two-way contract ☘️ pic.twitter.com/oLeXz1AgLP


Davison, who signed his contract before going for 10 points, six rebounds and six assists in his Summer League debut -- to go along with three blocks and two steals as a starter -- has spent the last week in training camp after being selected 53rd in last month's NBA Draft.

"Yeah, they have indicated to me I could get a roster spot," Davison said following the Celtics' 88-78 loss to the Miami Heat in their Las Vegas opener. "It's just come out here, have fun, go do me and maybe that spot will be yours, maybe not. Whenever my name will be called, I'll be ready."