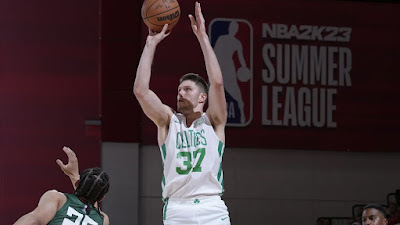 Matt Ryan hit a 3-pointer with 0.5 seconds left to give the Celtics a 111-109 victory over the Milwaukee Bucks Monday night at the Cox Pavilion in Las Vegas.
With the team trailing 109-108 in the final 6.3 ticks left, Ryan dribbled his way up the court before popping a one-handed heave from the top of the key that banked off the backboard to give Boston its first win of Summer League play.

Ryan, who injured his left ankle when he landed, limped to the C's bench as his teammates were able to close it out on the last possession and celebrate the bank-shot.

"It's pretty emotional. It's been a crazy couple of months," Ryan said in his postgame presser while fighting off tears. "I was home for a year and a half. I don't know if you guys have heard my story, but I was driving Door Dash a year ago. To be here, to be part of the Boston Celtics is special."

In a back-and-forth game that included 20-lead changes, Ryan was the Celtics leading scorer with 23 points on 6-of-11 from deep off the bench. Mfiondu Kabengele recorded a double-double of 15 points, 11 rebounds, while Brodic Thomas added 14 points (4-of-8 from 3) and eight rebounds. Juhann Begarin also chipped in 13 points on 5-of-11 shooting from the field to help Boston improve to a 1-1 record in Las Vegas.
Sandro Mamukelashvili finished with a game-high 28 points to go along with nine rebounds for the Bucks. Lindell Wigginton had 24 points and MarJon Beauchamp netted 15 points for Milwaukee, who are also 1-1 after two games played in Summer League so far.
Just seconds prior to Ryan's game-winner, the Celtics were behind 107-105 when the 2022 second-round draft pick JD Davison was fouled and hit 1-of-2 from the free throw line before the Bucks called a timeout.
However, during the timeout, Boston's coaching staff brought to the officials' attention that there had been a scoring error on a previous play and they should have had 108 points on the board instead of 106. After a lengthy review the referees added two more points to the Celtics' total, giving them a 108-107 advantage.
Wigginton was fouled on the very next play and sank both free throws, giving the Bucks a one-point lead that set up Ryan's 3-pointer -- which was the play of the game -- capping off a 14-point fourth quarter for the forward.
The Celtics, who had six players score in double-figures and shot 19-of-46 overall from behind the arc, will be back at Tuesday night when they face the Golden State Warriors at 9:00 ET on ESPN.
Joel Pavón
Follow @Joe1_CSP