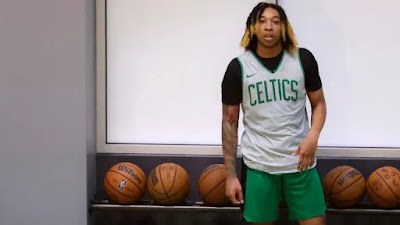 JD Davison is ready to show what he can do at the NBA level ahead of the Celtics Summer League in Las Vegas this weekend.
After his lone season at the University of Alabama, Davison believes he can eventually carve out a role with the C's, who selected him with the 53rd pick (second-round) in last month's NBA Draft.

"My season at Alabama didn't go as well as I wanted to, but I think I had spurts of what I showed and what I can do at the NBA level," Davison said Tuesday following practice. "My decision was because the NBA floor is so spaced out for a dynamic guard like me, I think it was the best for me to go out and go to the draft."

Davison spoke to the Boston media for the first time since being drafted and Summer League coach Ben Sullivan says the Celtics are still getting to know their rookie before the roster heads to Las Vegas.

"He's been great every step of the way," Sullivan said during his post-practice presser. "But it's really just in the very early stages. We're just excited to meet him, excited he's here, so we're just getting started."

While Davison is clearly known for being an athletic combo guard, he also understands the need to play defense, especially on team coming off an NBA Finals runs that was ranked the best defensive roster in the league last season.

You can catch Davison and the Celtics tip-off their Summer League schedule against the Miami Heat Saturday at 5:30 PM EST on NBATV.
Joel Pavón
Follow @Joe1_CSP