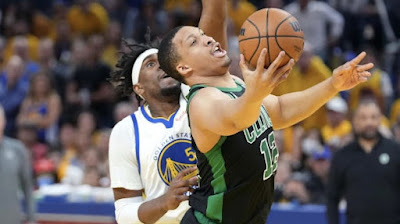 Grant Williams has had more than a month to think about the Celtics loss to the Golden State Warriors in the NBA Finals and despite falling to the eventual champions, the big man still believes Boston was the better team.
During his appearance on Miami Heat forward Duncan Robinson's "The Long Shot" podcast this week, Williams spoke about several topics, including his so-called rivalry with Draymond Green and how the Celtics felt after losing to the Dubs in six games last month to end their run to the Finals.

Williams went on to say that the Celtics -- who averaged 16.8 turnovers for the series -- beat themselves, while the Warriors' "championship pedigree" helped them in the end.

"You should have heard how bad they celebrated after Game 4," Williams said. “They were screaming, because they knew they weren't supposed to win that game. Stuff like that, the over-confidence side of things got to us."

Meanwhile, Williams and Green could be seen chirping to each other throughout the series. Williams has made it be known that not only is he a fan of Green, but also modeled his game after him, despite the two going back-and-forth.

"I'm always trying to do the annoying shit," Williams said, as he kept going at Green about his poor shooting. "I got facts about this man from Google. 'Ain't you supposed to be from Saginaw? How you going to complain about this bullshit ass call?'

"Somebody told me a story about how he got into an altercation when he was younger and he was knocked out, and I remember, I was doing research. I was dialed in trying to throw him off, and that was the first time I've ever had Dray not say something back to me. I was like, 'Yeah. I got one that time.'"

While Williams made sure to reiterate that he "idolized" Green growing up and that their trash talk was "all love," it remains to be seen if Green will see it that way -- especially with the claim that the Warriors were not the better team.
Joel Pavón
Follow @Joe1_CSP