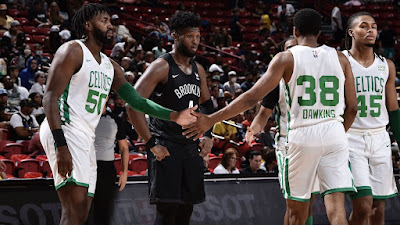 The Celtics wrapped up their Summer League games with a 102-95 loss to the Brooklyn Nets Saturday night at the Thomas and Mack Center in Las Vegas.
Juhann Begarin finished with 25 points (9-of-17 shooting), seven rebounds, while Mfiondu Kabengele added 18 points in the finale. After going off in the C's 108-91 win over the Memphis Grizzlies on Thursday, second-round pick in last month's draft JD Davison followed it up with 17 points and 10 assists for his second straight double-double.
Cam Thomas led the Nets with 25 points on 10-of-20 from the field and David Duke Jr. netted 24 points. Kessler Edwards chipped in 15 points to help Brooklyn improve to 3-2.
The Celtics jumped ahead 22-12 out of the gate, before the Nets used a 11-0 run to take 23-22 advantage into the second quarter. A 12-4 spurt gave Boston a lead for good the rest of the first half, as the C's were up 52-46 at the break.
With the game tied 63-63 with 3:16 left in the third, the Celtics were outscored 9-6, as they were held to only 17 total points in the period and were behind 72-69 heading into the final frame. Boston failed to re-gain a lead in the fourth, trailing by as many as 10 two separate times in the quarter -- but were within five (95-90) with 1:57 remaining, the closest they'd get.
The Celtics, who were tied for first place heading into Friday with a slim chance to advance to the championship game, were eliminated from Sunday's finale when it was announced that the New York Knicks and Portland Trail Blazers would battle for the Summer League title -- making Saturday's bout against the Nets essentially meaningless -- Boston concluded their time in Las Vegas with a 3-2 record.
Joel Pavón
Follow @Joe1_CSP