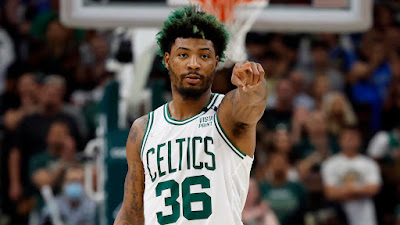 Fresh off a trip to the NBA Finals and the longest-tenured Celtic Marcus Smart is still hearing the chatter of yet another offseason of trade rumors.
Despite a successful first year of being the C's starting point-guard, which began when Smart signed a four-year, $77.1 million extension last summer and ended with an NBA Finals berth -- the first since 2010 -- the naysayers are back at it again when it comes to the criticism of the veteran.
After eight seasons in Boston, Smart just shrugs it off and lets his play continue to do the talking.

"I think I proved a little bit of everything," Smart told The Boston Globe's Adam Himmelsbach. "I hear the talks about 'He's not a true point guard' and this and that. 'They need a star point guard.' We've had star point guards, and yet this so-called non-point guard is the only one that's led them to the Finals.
"I think that right there says enough. I don't really need to say too much more. I think everybody sees and understands, finally, the person I really am, and what I can do given the opportunity."

The Celtics turned their season around once Smart returned from injury on January 23, as they went 28-7 the rest of the way to finish 51-31 and as the second seed in the Eastern Conference. Smart averaged 12.8 points, 6.5 assists and 3.6 rebounds during that span. The Defensive Player of the Year proved that his playmaking ability and leadership was a huge reason for the team's run to the Finals.
But the critics are back in full force after the Celtics came up short against the Golden State Warriors and not raising Banner 18, as they're calling for an upgrade of Smart at the point guard position once again.

"And I'm still here," Smart told Himmelsbach. "I'm still the longest-tenured Celtic. So for me, I take it as a compliment. It means you're valued pretty high and if your name is talked about people want you. But I don’t pay much attention. I know what I bring to the table, and that’s what I focus on, what I bring to this team.
"We'll figure everything else out. [Brad Stevens] is great at what he does and he's going to figure out the right pieces to make sure we stay going in the right direction."

Speaking of the Celtics president of basketball operations, as NBA free agent season is well upon us, when asked if Boston should be a destination for players to consider, especially with the C's coming off a Finals run, Smart believes his team should be a top choice come this summer.

"I think over the years we got a bad rep in Boston for free agents, for older vets wanting to come," Smart said Tuesday at his Young Game Changers basketball clinic, via Himmelsbach. "I think this year really opened a lot of people's eyes and showed what we can do, how this team is.
"We're a team. It's all one. I think that opened a lot of people's eyes to maybe give it a shot in Boston."

With the homegrown talented core of Smart, Robert Williams, Jayson Tatum and Jaylen Brown (eligible for a contract extension this offseason) all signed through the 2023-24 campaign along with head coach Ime Udoka, Stevens could get some help from his vets in recruiting potential free-agent targets.

"I think, for us, we have a lot of power," Smart said. "It's just finding the balance. It's kind of hard to tell you what we need when we just made the Finals.
"Now, obviously, we might need something. At this moment, I couldn't tell you what that is. I'm sure Brad and his staff will do a good job of finding what we need and trying to get it. If not, then try to do everything we can with what we have."

NBA free agency is set to begin June 30, with Boston having their taxpayer midlevel exception of $6.4 million to dangle, which isn't much but could entice a veteran that's willing to take a pay cut to join a contender like this current Celtics roster already is.
Joel Pavón
Follow @Joe1_CSP