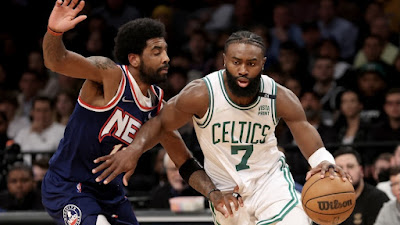 Jaylen Brown appeared to be somewhat confused as many were Monday morning regarding the Celtics including the All-Star in a reported trade offer to the Brooklyn Nets for Kevin Durant.
According to ESPN's Adrian Wojnarowski, Boston became latest team to engage in talks on a possible Durant deal, while The Athletic's Shams Charania reported that the C's offered Brown, Derrick White and a draft pick, to which the Nets rejected.
Amid Brown being the center of trade rumors once again, the 25-year-old "wants to be in Boston" and is "still committed" to the Celtics -- per Jared Weiss of The Athletic.
Following reports of being involved in a potential trade for Durant, Brown sent out a tweet that is definitely open for interpretation.


According to Weiss, Brown was "perplexed" by WEEI's Jermaine Wiggins and a statement made earlier this month that the Celtics wing told him "he wants out" of Boston because he no longer wanted to play in Jayson Tatum's shadow.
Brown has since "denied the report behind closed doors" because he wants to remain with the Celtics.
Mark Murphy of the Boston Herald, per a source, described Brown's reaction to being in trade rumors:

"He loves it in Boston. He was two games away from a championship. He's happy and looking forward to coming back. ... Like Kawhi [Leonard], AD [Anthony Davis] and others on that level, he's going to be included in every report because of who he is."

More than 24 hours later following Woj's and Shams reports, the C's have not shown any indications that they actually made the trade offer or plan to meet the Nets' asking price which could mean "potentially one more rotation player" in any future proposals made.
Durant, who will soon turn 34-years-old, is set to make $44 million this upcoming season -- the first of a four-year, $194 million extension signed last summer -- while Brown has two years left at $55.2 million after coming off the 2021-22 campaign with averages of 23.6 points, 6.6 rebounds and 3.5 assists in 66 games played. He helped lead the Celtics to the NBA Finals that ended in six games to the Golden State Warriors.
Joel Pavón
Follow @Joe1_CSP