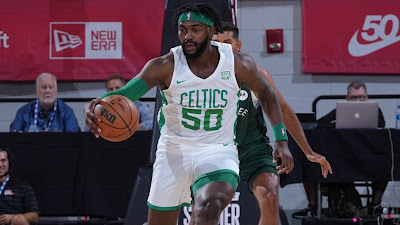 Trevion Williams has found a new team for the upcoming 2022-23 campaign, following his Summer League stint with the Celtics.
According to The Athletic's Shams Charania, Williams has agreed to an Exhibit 10 deal with the Golden State Warriors.

Undrafted Purdue center Trevion Williams has agreed to a deal with the Golden State Warriors, sources tell @TheAthletic @Stadium. Exhibit 10 contract to compete for a roster spot for Williams, who averaged 7.4 points, 6.6 rebounds and 14.2 minutes for Boston in summer league.


An Exhibit 10 deal means Williams will join the Warriors on a one-year, non-guaranteed contract that could be converted into a Two-Way deal before the start of the regular season.
The 6-foot-10 center showed promise as a playmaker during training camp a few weeks ago in preparation for Celtics Summer League. Williams, who went undrafted last month, played four of the five games out in Las Vegas, where he averaged 7.4 points and 6.6 rebounds in 14.2 minutes per contest.