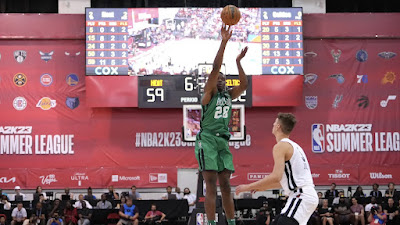 The Celtics fell to the Miami Heat 88-78 Saturday afternoon to open up Summer League play at the Cox Pavilion in Las Vegas.
Matt Ryan, who was on a Two-Way deal with the C's this past season, led the team in scoring with 15 points on 4-of-8 from behind the arc. Big man Mfiondu Kabengele finished with 14 points, while hitting 5-of-7 from the field and grabbing six rebounds. 2021 second-round pick Juhann Begarin added 13 points, as he went 9-of-10 from the free throw line to go along with six rebounds in the loss.
JD Davison, who was Boston's second-round pick in last month's NBA Draft, recorded 10 points, six rebounds and six assists (28 minutes as a starter) in his Summer League debut.

"I thought he had a nice pace and control to the game offensively," said Celtics Summer League coach Ben Sullivan in his post-game presser about Davison's play.

Mychal Mulder had a game-high 23 points on 5-of-7 from 3-point territory for the Heat, while Haywood Highsmith added 14 points and six rebounds. Marcus Garrett chipped in 13 points and Orlando Robinson netted 12 points in the win.
The Celtics jumped out to a 9-0 lead to start the first quarter, before the Heat went on a 9-0 spurt of their own to tie the game.
With 2:46 left in the second period and the game all knotted up 45-45, Miami used a 12-4 run to take a 57-49 advantage at the break. Boston never led in the second half, as they trailed by as many as 18 points the rest of the way.
The Celtics will re-group and return to action in Vegas Monday night when they face the Milwaukee Bucks at 8:00 PM ET on NBATV.
Joel Pavón
Follow @Joe1_CSP