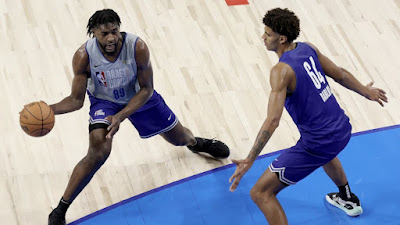 Trevion Williams gets to put his skills on display for the Celtics once their NBA Summer League schedule opens up in Las Vegas this weekend.
The 6-foot-10 center, that went undrafted last month, has been giving an opportunity to prove what he can do following his four years at Perdue. Williams is coming off a senior year where he averaged 12.0 points, 7.4 rebounds and 3.0 assists in 20.1 minutes per contest as a combo big.
While regarded as one of the top passing big men in this year's NBA Draft, Williams has impressed the Celtics in Summer League training camp so far with his elite passing ability.

"The first thing that stood out is his passing. Such a willing passer. Vision. He can see the whole floor," said Celtics Summer League coach Ben Sullivan during after practice Thursday. "With his size and touch and feel, I was just really impressed with not only his willingness to pass, but his vision and ability to see the floor."

Williams has made it look fairly easy with the frequent no-look passes, according to teammate Sam Hauser, who also says he "makes his teammates better" with his many assists.

"I know there's a couple times where he was kind of looking the other way and threw it to a different guy that he wasn't looking at, right in the shooting pocket for a 3," said Hauser during his post-practice presser. "So I think there's been a lot of examples like that throughout these practices that [indicate] he's gonna have a real impact in these games coming up."

Hauser, who is known for his 3-point shooting, has obviously been a recipient of a Williams' pass or two during training camp at the Auerbach Center this past week.
Williams has a shot to not only fight for a roster spot by showing off his passing, rebounding and his skills as a strong finisher when the Celtics take on the Miami Heat on Saturday (5:30 PM ET on NBATV) when their Las Vegas Summer League games tip-off.
Joel Pavón
Follow @Joe1_CSP