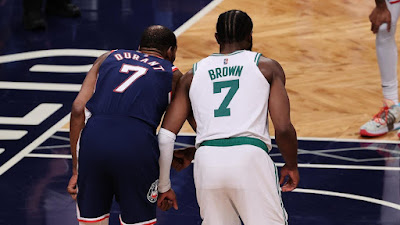 You can count ESPN's Tim Bontemps as one who wouldn't pull the trigger on a trade that involves Jaylen Brown for Kevin Durant.
The NBA insider, who appeared on the "Hoop Collective" podcast with a panel of his fellow colleagues Brian Windhorst and Tim MacMahon, reacted to recent reports that the Celtics offered a trade package of Brown, Derrick White and a future draft pick for Durant -- to which the Brooklyn Nets rejected.
According to Shams Charania of The Athletic, the Nets also wanted Marcus Smart, more draft picks and "potentially one more rotation player," per league sources.
While a swap of Brown for Durant has its pros and cons for both the Celtics and Nets, Bontemps believes Boston would fare much more in the long run by keeping their All-Star duo of Brown and Jayson Tatum together.

"I'm also on the record of saying I wouldn't do this trade if I was the Celtics, which I understand is maybe a minority position," said Bontemps. "But, I look at this Celtics team, and as MacMahon said, the most valuable thing you can find in the league right now are young two-way wing players, and the Celtics have built this team around two of them."

Bontemps also gave praise to Celtics president of basketball operations Brad Stevens for building a contender around Tatum and Brown, without having the need to bring in a player of Durant's caliber.

"This team has been built around those two guys, and they have a chance, to me, to be a championship-level team for the next five to seven years, assuming that Jaylen re-signs," said Bontemps. "And I'm not giving that up even to take on Kevin Durant at this point, as great as Durant is, given the injury concerns you have, given the age concerns you have, and given the fact that the Celtics are already to me one of the three or four best teams in the league."

He also added that teams like the Celtics, who Bontemps has considered already one of the best for this upcoming 2022-23 campaign as currently constructed, don't need to take such a risk in wanting to add Durant to their roster since they're in the top tier of the league.

"For me, ultimately, I wouldn't be doing it because if you look at the past, the teams that have made this kind of trade, to get a guy like Kevin Durant, you're a team that's not in the very top tier, that's trying to get in the top tier," said Bontemps.

"So, it's worth taking the risk, because obviously there's some risk there, to dramatically alter your team to get this guy. For me, the Celtics are already in that tier, and they're set up to be in that tier for five years, I wouldn't be sacrificing that," Bontemps added.

Bontemps also contributed on a piece with Bobby Marks for ESPN.com this week, where he writes about the Celtics acquiring more depth this offseason, following being only two-wins shy of an NBA title, as another reason not to go through with a potential trade for a soon-to-be 34-year-old former league MVP.

"Durant is obviously an all-time-great player and clearly is better than Brown right now," said the ESPN analyst. "But the Celtics have built the NBA's deepest team, especially after getting Malcolm Brogdon this summer from the Indiana Pacers. Boston has constructed a roster built around a pair of young, dynamic two-way wing players in Brown and Jayson Tatum, and has as good of a defense as I've seen in my decade covering the NBA. Trading for Durant would mean fundamentally changing the team and how it plays."

"Many people would look at that and say, 'Sign me up!' I completely understand why," added Bontemps. "But, to me, you make this trade only if it moves you from one tier to another when discussing a team's championship odds. In my opinion, that would not be the case for the Celtics."

Whether you agree with Bontemps or not, he makes some valid points on how the Celtics don't necessarily need to make this reported deal for Durant happen to be viewed as a top-three or four team heading into next season.
Joel Pavón
Follow @Joe1_CSP