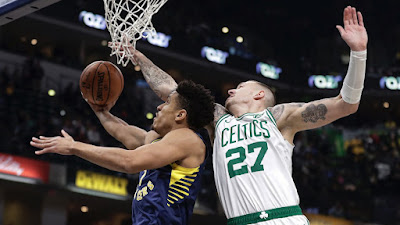 The Celtics have reportedly acquired Malcolm Brogdon from the Indiana Pacers Friday afternoon for Daniel Theis, Aaron Nesmith, Malik Fitts, Juwan Morgan, Nik Stauskas and a 2023 first-round draft pick, according to ESPN's Adrian Wojnarowski.
Team president of basketball operations Brad Stevens brings in a proven playmaking veteran point guard in Brogdon, who will earn $22.6 million in the upcoming 2022-23 campaign and is under contract through 2025 (three more years).
Brogdon is coming off an injury plagued year (Achilles) in Indiana, averaging 19.1 points per contest in 36 games played, while also shooting a career-low 31.2% from 3-point territory. During his six years in the league, the 29-year old has averaged 15.5 points on 46.4% from the field and 37.6% from deep, 4.2 rebounds and 4.8 assists.
The move will add $10 million to Boston's payroll for next season, as Stevens is also expected to use the team's $6.4 million taxpayers mid-level exception to sign Danilo Gallinari -- who's reportedly on his way to the Celtics once he clears waivers following being traded to the San Antonio Spurs earlier this week for All-Star Dejounte Murray.
Joel Pavón
Follow @Joe1_CSP