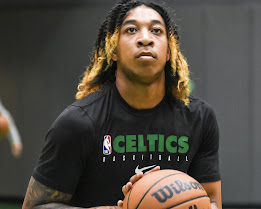 The Celtics have announced their 2022 Las Vegas Summer League roster ahead of the July 9th tip-off.
Returning players from last summer include; Sam Hauser, Brodric Thomas, Matt Ryan and Juhann Begarin, but no Yam Madar due to prior commitment with the Israeli national team. Plus, Celtics' 2022 second-round pick JD Davison will get his first taste of NBA basketball.

"[I] just go out and be me: a leader on the offensive end, a dog on the defensive end, just leading my guys to a win," said Davison during his post-practice presser Tuesday afternoon.

AJ Reeves, who is a Roxbury, MA native, has also been added to the Celtics team that is heading to Las Vegas. The Providence College product went undrafted last month, but has been extended an opportunity following a solid pre-draft workout for the C's, to showcase that he can play at the NBA level.

"The emotion just flooded me," said Reeves via an interview with the Boston Globe. "I'm still excited right now. I can't even speak."

At 6-foot-6 Reeves can play either guard position, as he'll look to win one of the two Two-Way open roster spots the Celtics have with his play out in Vegas.
Here's how the full roster will look like:
Ben Sullivan will be the squad's coach this year, following the departure of Celtics top assistant Will Hardy -- who was hired by the Utah Jazz to become their head coach last week.
Boston is scheduled to face the Miami Heat on July 9th (5:30 PM ET), before taking on the Milwaukee Bucks on July 11th (8:00 PM ET). The Celtics get their NBA Finals rematch against the Golden State Warriors the very next day on July 12th (8:00 PM ET) and will finish off against the Memphis Grizzlies on July 14th (3:30 PM ET). Depending on their record, the C's could play in the championship game come July 17th (TBD) or possibly a fifth game on either the same day and or on July 16th.
All games will be broadcasted on NBATV except the matchup against the Warriors (ESPN2).
The Celtics fell short of a championship last summer after Payton Pritchard led the roster to a second place finish.
Joel Pavón
Follow @Joe1_CSP