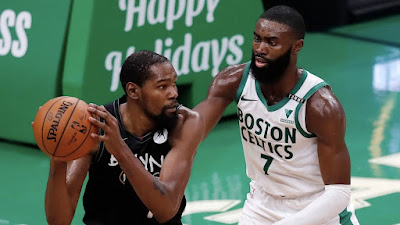 It has been quite the Monday since news broke at the wee hours of the night regarding the Celtics and the Brooklyn Nets.
While most were likely sleeping, ESPN's Adrian Wojnarowski dropped a bomb that Boston had reportedly engaged in trade talks with the Nets surrounding Kevin Durant.

"The Celtics appear no closer to acquiring Durant than others in discussions with the Nets, but Boston's ability to include All-Star forward Jaylen Brown as a centerpiece in offers does help make the team formidable in its pursuit, sources said."

As many were waking up to that Woj report Monday morning and somewhat trying to process it, The Athletic's Shams Charania provided even more details hours later on a reported trade package offer made by the Celtics involving Jaylen Brown in exchange for Durant.

"The Celtics offered [Jaylen] Brown, guard Derrick White and a draft pick to the Nets for Durant, sources said. The proposal was rejected, and Brooklyn has asked Boston -- in any proposal -- to include Brown, Defensive Player of the Year Marcus Smart, draft picks and potentially one more rotation player, those sources added. Currently, the Celtics are less inclined to include Smart along with multiple other player assets or pick assets, but the franchise is mulling over next steps on how to approach discussions."

Durant, soon to turn 34, is set to make $44 million next season -- the first of a four-year, $194 million max extension. Brown at 25-years-old, has two years remaining on his current deal and will be owned $28.7 million this upcoming 2022-23 campaign. While the Celtics have other pieces to match salary without Brown's contract -- including Al Horford ($26.5 million), Marcus Smart ($17.2 million), Derrick White ($16.9 million) and Robert Williams ($10.9 million) -- according to both reports, any trade talks between the Nets for Durant would begin with Brown and go from there.
Meanwhile, other teams that were interested in Durant's services such as the Phoenix Suns, Toronto Raptors and Miami Heat, as previously reported, have not met the Nets' asking price for the former MVP -- who requested to be traded just hours prior to the start of free agency.
It's also unknown if any of the aforementioned teams, including Boston, have actually made an offer for Durant and the Nets are waiting to make a decision or these rumored reports are simply coming from Brooklyn's front office in an effort to drive up the price.
Either way, it should be an interesting week of speculation from the media and Celtics fans of what these reports mean after it appeared team president of basketball operations Brad Stevens was pretty much done adding to his roster that was two games away from an NBA title almost two months ago.
Joel Pavón
Follow @Joe1_CSP