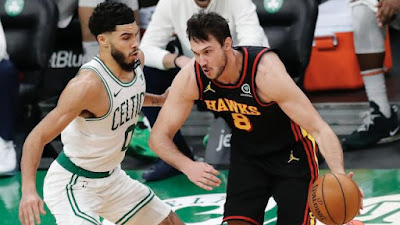 Danilo Gallinari has reportedly agreed to a two-year, $13.3 million deal with the Celtics, according to ESPN's Adrian Wojnarowski.
Per Gallinari's agent Michael Tellem of Excel Sports, there's a player option on the second year and will be fully guaranteed.

Adding on his partial guarantee for 2022-2023 prior to the Spurs waiving him, Gallinari will make $17M-plus this season and now joins the championship chase with the Celtics.


Gallinari, who was waived by the San Antonio Spurs Friday after being dealt from the Atlanta Hawks for All-Star Dejounte Murray last month, joins a deep Celtics bench that also includes the addition of Malcolm Brogdon via a trade with the Indiana Pacers. The veteran forward will make over $17 million this upcoming season with the partial guarantee on his 2022-2023 contract before clearing waivers from the Spurs.
During the 2021-22 campaign at age 33, Gallinari averaged averaged 11.7 points on 38% from 3-point territory for the Hawks. In 13 NBA seasons, the Italian sharpshooters has averaged 15.6 points and 4.8 rebounds for his career.
The Celtics, who likely used their taxpayer midlevel exception to sign Gallinari, have three open roster spots and one two-way spot available after signing 2022 second-round pick JD Davison to a Two-Way deal Saturday.
Joel Pavón
Follow @Joe1_CSP